Due to this topic I read Wyrd Sisters and most of Pyramids this weekend, while enjoying a virus which is still with me. It’s a fairly weak virus, but there’s some throat hurting and lack of energy and all that.

Finished the biggest part of The Art of Point + Click Adventure Games (when I first got it, I only looked at the pictures). It could have done with a bit of proofreading and a slightly larger font, but overall I enjoyed it a lot.

One thing it succeeded in was raising some appreciation even for the games I have not and will not play, for one reason or another. There were also a few games I had not heard about before, or perhaps already forgotten, and that was nice too.

If there is something to criticize, it’s perhaps the overabundance of LucasArts related games and interviews in comparison to the rest. My feeling is they take up close to 50% of the book, and while those people and games are clearly amongst my favourites (or else I would not be here in the first place), I thought it gave a bit of a skewed view on the genre as a whole. Related to that is how sparsely “modern” adventure games are covered. I guess there were only so much pages, and it may have made sense to concentrate on the classics more, but it gives the impression that the heydays of the genre are long over, when clearly they are not. That also leaves German developers in the dust: while we have 4 games from Daedalic covered (but not Memoria, and not a single interview) and King Art gets an honourable mention in the beginning, there’s not a word about Deck13 or Studio Fizbin, for example.

Overall, it’s a book well worth buying for any fan of the genre, though. And maybe there’s the chance for a sequel, 20 years from now, to cover the modern “classics”

Finally read Dan Simmons’ Olympos, after initially passing it by due to some review(s) I’d read right after finishing Ilium. It’s not half as bad as the reviewer made it to be. In fact, it’s quite good, if perhaps not bringing the foundation laid out by Ilium to full fruition. (It’s better in that regard than Endymion is compared to Hyperion, though)

But Simmons is certainly a writer who can build and maintain suspense over most of the 950+ pages, making it one of very few books I found hard to put down in recent years. And it’s very imaginative (if not really original, but what is these days?). Recommended!

Hyperion has been on my all too long too read list for many years.

Hyperion is definitely the best of the bunch (and Endymion the “worst”).

Incidentally, the “rivers of space” present in the upcoming Heaven’s Vault totally remind me of the river Tethys in the Hyperion Cantos (the concept is a bit different, but I wonder if that’s been a source of inspiration for Inkle nevertheless).

In VGA or EGA?

Not a lot of books worth mentioning that year, until recently. I was still a bit unsure whether to post here, and if I did, what to write, but luckily, on page 289, the author deemed to leave a comprehensive summary of the oeuvre, to help cases such as mine, I guess. It goes

He said he was trying also to write about impossible, obsessional love, father-son relationships, sibling quarrels, and yes, unforgivable things; about Indian immigrants, racism towards them, crooks among them; about cyber-spies, science-fiction, the intertwining of fictional and ‘real’ realities, the death of the author, the end of the world. […] And it’s about opioid addiction, too.

All that, and more, is Salman Rushdie’s Quichotte, and I cannot recommend it enough, because it will rock your socks off (no, wait, that’s supposedly Disco Elysium). Anyway, still got another 100 pages to go, but at that point I don’t think there is anything that could ruin my enjoyment of that book.

Well, it was about time I got around to this. I'm guessing this is mandatory reading for every fan of Monkey Island! https://t.co/AcpFgTBTFf

So this book starts out interesting. Right in the middle of a scene in the jungle like the first Indiana Jones movie the story begins with a conjuring of ghosts in a tribal hut somewhere in the caribbean. So you know right from the start there is gonna be voodoo!

The main character doesn´t really WANT to be a pirate he gets to be one because the ship he was on was attacked. He is described as young and shy (not a good talker with women just like our Guybrush) and he also has blonde hair in a ponytail and a bit of a beard. His love interest isn´t a governor but the daughter of the guy from the prologue who wanted to resurrect his dead wife with voodoo magic. His first trial comes when he wounds the pirate captain in a fencing duel enough to impress him to let him live. Turns out he learned fencing from his former job as a pupeteer and he was only imitating the marionette movements in real live, luckily with enough success. Later on he becomes the cook for the pirates. His ultimate goal is get back heritage money from his uncle that he stole from his father.

Apparently Blackbeard´s Ghost appears later in that story so that might be were LeChuck came from. I´ll give you the rest of my thoughts when I´m done with it. 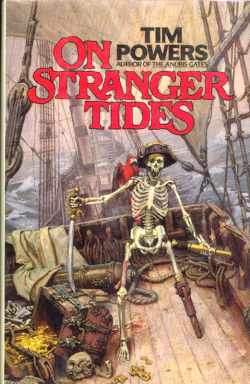 So I finished On Stranger Tides and I really loved it!

What is it about? It is about Jack Shandy who at the beginning of the story is a regular guy whose ship gets attacked by pirates on his way to jamaica. Reluctantly he becomes a pirate still hoping to be able to track down his treacherous uncle who owes him his father´s wealth.

The pirate crew team up with the crew of the notrorious Captain Blackbeard who is in search for imortality with the help of the famed Fountain Of Youth. Beth Hurwood who is Jack Shandy´s love interest is unbeknownst needed by her mourning father to ressurect his dead wife via the fountains powers. So after they find the Fountain Shandy of course attempts to rescue her and after Blackbeard meets his historically documented demise he and his crew are ressurected as Zombie Pirates via Voodoo magic.

So how is it like Monkey Island? Jack Shandy while a different personality than Guybrush (she is talented with the sabre and also shots his enemies with a gun) is shy and doesn´t really belong into this pirate world at first. But his physical apparence is a near exact description of Guybrush, blonde ponytail and all.

Beth Hurwood as the daughter of the mourning scientist turned voodoo magician is pretty much the damsel in distress except for the very ending of the story.

Blackbeard is clearly the blueprint for LeChuck. He is a terryfing and hulking personality and his crew become zombie pirates. At the end of the book he is reincarnated into a baldheaded person that our hero doesn´t at first recognise (so a lot like Fester Shinetop really) and at the very end of the story he tries to marry Shandy´s love interest Beth to achieve true imortality (so there is an interrupted marriage ceremony here too like at the end of the first Monkey Island).

This I think is where the similarities end. It really is mostly the idea of the three main characters that are in place and the influence of Voodoo Magic and Zombie pirates are ideas that play a big part in Monkey Island. Also that the character starts out as not a pirate but becomes one later, though with vastly different motives and circumstances.

I really loved the book, was a quick and fun read. The ending was a bit rushed maybe (it appruptly ends directly after the finale confrontation like a 70s Martial Art movie) and there are Star Wars levels of coincidences here (like that Blackbeared had struck a deal with Shandy´s estranged uncle and held kidnapped Beth Hurwood hostage at his mansion thus giving Shandy a chance to rescue his love interest AND have take revenge with his uncle which he originally wanted to do before becoming a pirate and being roped in with the Fountain Of Youth plotline) but the action and atmosphere are a great joy and would make for a much better standalone movie than Pirates Of The Caribbean 4 probably was (haven´t seen the fourth and fifth movies of the series yet).

Oh yeah and by mere concidence when Shandy confronts his uncle he doesn´t tell him who he really is but instead pretends to be his own deceased father that was brought back to life by Voodoo magic exclaiming “I AM your brother!” but that similiarty to the ending of Monkey Island 2 (the Return Of The Jedi parody) is most likely coincidental.

Oh yeah and if you read the book you´ll learn the secret of monkey island, but I´m not telling. To find that out you gotta read it yourself.

Hooked hands up from me!

Finished The Broken Earth series by Nora Jemisin. It’s only three books long, and those are fairly short each, but they are among the best I’ve had in the past year or so. I really liked the writing style, but also the worldbuilding and the overall story. Although it’s not the uplifting sort of books to which you’d want to return any time soon.

However, I would add it to a very short list of fantasy books/series that depict a world that is actually strange and foreign and not just a thinly veiled historical setting with magic and dragons. Exploring that world and feeling a sense of awe and wonder, despite some nasty scenes, and despite much of the mystery getting revealed towards the end, is what made this such a great read. So I really have to recommend it

I’ve read the first one around 6 months ago but hesitate to pick up the next one. Should I give it a chance? Or would you say that if they first one didn’t grab me then the rest of the series probably won’t either…?

Book 2 and 3 aren’t that different from the first in tone, style and proceedings. So I would imagine that you might not like them any better. It’s hard to tell, though. Was there anything in particular that bothered you about the first one?