The 2020 what are we playing thread

Let’s just say It’s one of those games that were clearly targeted at teenage boys, written by developers with the mindset of teenage boys. Because of that, the game does not only feel old, but also a bit backwards, actually.

I read how awful Simon’s character was in a review back in the day and thought naaa… I’m sure they are overreacting. Few years later I played the gama and yep… So, I haven’t played it lately but I’m sure my opinion would be even more harsh now. I remember liking Simon 1 but I bet it didn’t age gracefully as well.

I remember liking Simon 1 but I bet it didn’t age gracefully as well.

I played it back then and I hadn’t that impression. AFAIR the game was very funny. But I was young

so maybe I wouldn’t say the same after replaying it.

And I’m sure 25 years ago I would have laughed and thought no more of it. O the innocence of youth!

I remember liking Simon 1 but I bet it didn’t age gracefully as well.

I replayed a bit of it a year or two ago and I didn’t get the same bad vibes. I don’t recall anything from the first time I played it, though.

Hm, the game uses the Unreal engine as far as I remember

Hold up, this is running on the same engine as Unreal, the game’s that’s basically about fancy lighting effects?

Hold up, this is running on the same engine as Unreal

No, Wikipedia says that Simon 3D is using the NetImmerse Engine.

Didn’t get around to playing yet due to the length of the intro sequence.

Which version are you watching playing? The “remastered” one?

Igitt! as they say in German.

I mean, look at this… there’s all kinds of filters I can enable in ScummVM if I want to. Which for the record I don’t, except for x3/x4 or whatever insofar as you can call that a filter, and the weirdest part is most of them would look better! (If still worse than no filter.) 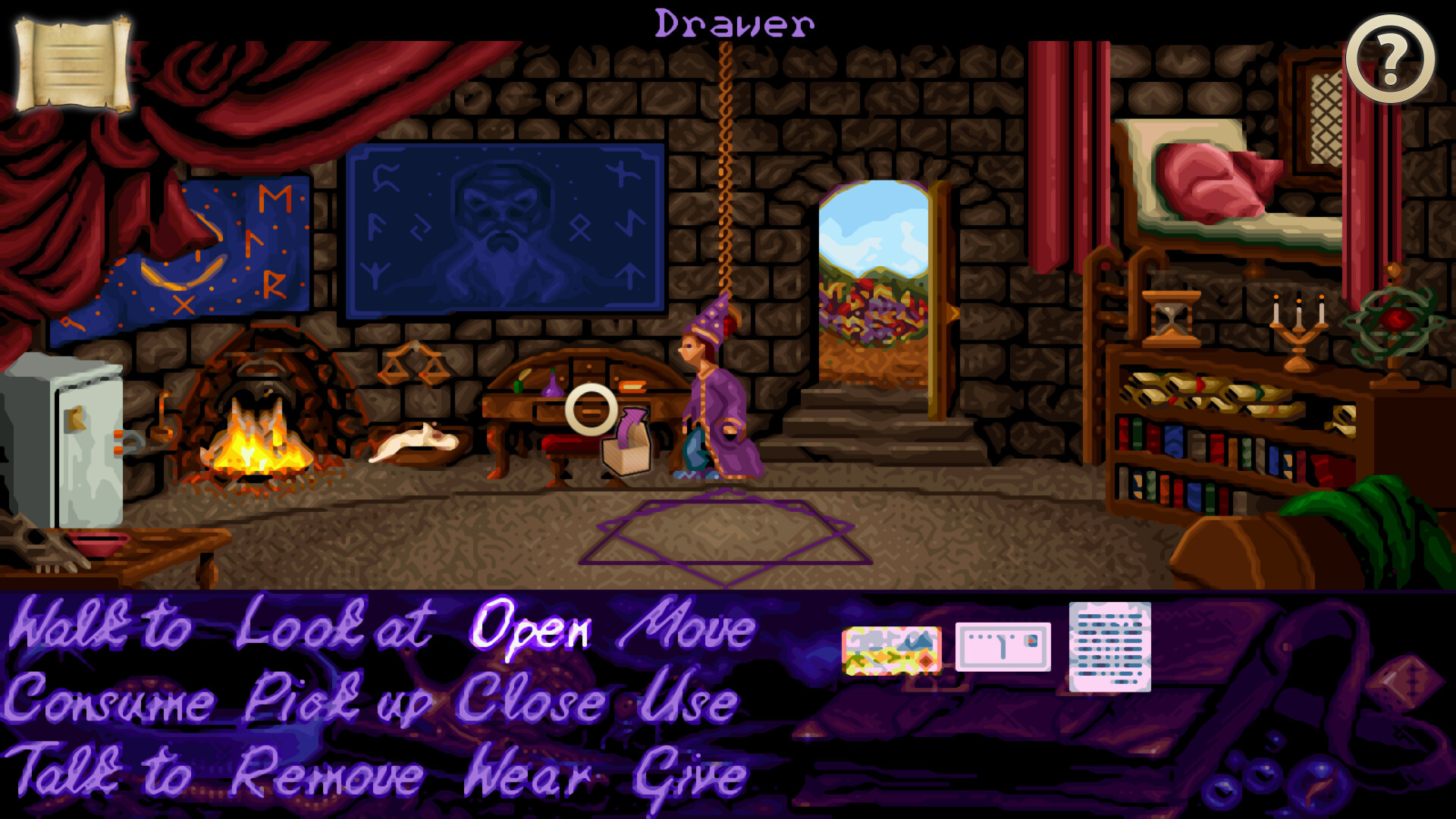 I bought all three games[*] in March of 2018 for less than the price of one 25th anniversary edition, which was quite fortuitous as it turns out.

I bought all three games[*] in March of 2018 for less than the price of one 25th anniversary edition, which was quite fortuitous as it turns out.

The only good thing about the anniversary edition is that it includes the original as a “bonus”. Though I don’t quite understand why they won’t sell them separately.

But seeing that screenshot, abysmal filter notwithstanding, I have to say the interface is so much nicer than that of StS2. Whoever thought replacing the verbs with nondescript icons was a good idea was wrong.

I mean, look at this…

When I first played Indy3 on Steam a few* years ago, I was impressed with the much smoother graphics and more rounded (and accentuated drawing style than I remembered the game from playing it back when. Much like in that screenshot of StS.
It was only after I finished it and added it to launch from my native ScummVM installation (which only had X4 or so), I realised it wasn’t my memory playing tricks on me, but a super strange HD filter they (Steam) had enabled by default.
Of course I played the game once more in “pixel perfect” mode right after!

* probably over 10 years by now

One thing I just noticed is that when the window is only about a quarter the size of my screen or less (like the screenshot appears in my forum post), the filter doesn’t look half bad. So on my phone or a Switch perhaps it might work.

The only good thing about the anniversary edition is that it includes the original as a “bonus”. Though I don’t quite understand why they won’t sell them separately.

It doesn’t have a simple setting switch btw?

When I first played Indy3 on Steam a few* years ago, I was impressed with the much smoother graphics and more rounded (and accentuated drawing style than I remembered the game from playing it back when. Much like in that screenshot of StS.

Indy3 has simpler graphics. I imagine such a filter would work better on it.

Indy3 has simpler graphics. I imagine such a filter would work better on it.

Well, I admit that I don’t like these filters at all and especially the “rounded” shapes. But maybe that is because I played the games in pixel mode first…

You could also say “less bad” but to each their own.

It doesn’t have a simple setting switch btw?

It might have, but as I went straight for the one bundled up with ScummVM for Linux I cannot say for sure.

Played LUNA The Shadow Dust. It’s nicely done, but in the end felt a bit unremarkable. Perhaps the decision to tell the story non-verbally, without other characters to interact with and mostly through flashbacks made it a somewhat quiet and contemplative experience.

Gameplay wise it reminds me of multiple games; a bit of Gorogoa, Myst, the Fairyland chapter from Chains of Satinav, but also parts that felt rather unique. Puzzle complexity gradually increases, and by the time they get a bit tricky the game is essentially over. Given that one cutscene remained locked after completing the game, I think there might be two different endings.

Apropos cutscenes: aside from one or two less than stellar digital effects, they are gorgeous. (Their style also reminds me of communist propaganda, though I haven’t figured out what exactly evokes that feeling. The content is something that could have come from Studio Ghibli, though. I definitely like them!)

I played another ~20 minutes of Wolfenstein: The New Order last night.

And I now have all GOG Wolfenstein games… again. First impressions are mildly negative. Weird controls: press E to pick up stuff like an annoying modern shooter, and Left Alt + S for some kind of bizarre extra far down crouch. This took me way too much effort to figure out. The game almost seems like it was made for a controller, which works a lot better, except then you suffer from using a controller. But since this doesn’t seem to be the kind of shooter where movement precision matters too…

Nothing much to add, except that I found a hidden passage triggered by a statue that reminded me of this classic one:

I finished The New Order. I have to say overall it somehow felt a lot more like Wolfenstein than I was anticipating it to feel. And that’s a good thing.

Once the difficulty started ramping up a bit I noticed the game hangs when you die. (I don’t think it did that in the first episode…) Changing it to “windowed fullscreen” or “windowed” resolves that problem. There are Steam discussion posts about it dating back six years, so that just seems sloppy. Besides that issue it was put together well enough. They did a pretty good job of making the linear levels seem like they weren’t overly so.

The biggest negative is that basically you and the enemies are all bullet sponges. The boss fights are pretty boring even if their looks are pretty neat, because they’re just giant bullet sponges while you’re running around recharging your laser. That’s pretty boring. (It’s arguably classic Wolf3D, but not everything’s worth keeping.) The game itself is often a lot of contrived “realistic” fetch quests.

All in all it’s a reasonably decent modern shooter. Not exactly recommended, but not one to avoid either. It’s an awful lot better than contemporary snorefests Call of Duty: Black Ops 2/Ghosts/Advanced Warfare/Black Ops 3.

tl;dr Probably worth a look on sale. The €9.09 I paid seems about right. Don’t pay €20, 'cause for that much you could just get Ion Fury.

Played Yes, Your Grace. It’s one of the few games I’ve been looking forward to this year, and it more than fulfilled my expectations. It’s a bit hard to describe without blowing it out of proportion, but it manages to combine a few simple mechanics and a run-of-the-mill narrative into something far greater than it should rightfully be: a game I found hard to quit and which had me on the edge of my seat by the end.

It also comes with a wonderful soundtrack and pretty pixel art:

Its only drawback: it was over way too quick (though the pacing was good for what plot it contained). There’s a bit of replay value as the outcome will vary depending on some of the choices, but of course all the surprise will be gone and I’m sure it won’t be as captivating as the first time. And I actually like to have that one, very personal rendition of the story rather than methodically enumerating all the different possibilities.

Today I started & finished my first playthrough of 80 days. I got it for “free” as part of some Humble Bundle about four years ago. It took me 88 days, mainly due to wasting probably at least six days on UI issues and four days due to prison in Vladivostok. I didn’t quite understand what was going on with the luggage in Tehran so I lost several days there because the clock is always ticking. A pretty annoying design decision in a text adventure if you ask me. At the market and in the trip planning screen time should be paused, or if not paused per se just subtracted by an hour or whatever.

Unfortunately this is one of those annoying games that believes allowing you to save is to strip the weight from choices, or something like that.

It’s a bit like a worse Echo Bazaar/Fallen London. All in all it’s a reasonable mobile port and I think I’d cautiously recommend it. It was pretty good for a couple of hours, and it may well be again for at least another playthrough or two. Perhaps I should go as far as warmly recommending it for trying something new, in spite of its flaws.

Edit (21 March): played a second time, made it in 76 days, could’ve probably done it in 50-60 if I hadn’t detoured by Lisbon… where I forgot to actually sell my stuff so I didn’t make nearly as much money as intended. It got older/more repetitive than I anticipated, even though I took almost a completely different route. I wouldn’t mind exploring the interactive text adventure a little more but I’m afraid the game around it might grow tedious.

I played 80 Days in 2016 and at least my first playthrough pretty much sounds like yours. I didn’t make it in or under 80 days, mostly for running out of money and spending way too long begging for more before continuing by the cheapest (and slowest) transport available. Being usually sensitive to a ticking clock, I did find that 80 Days wasn’t actually that bad. (Maybe because I regularly switch from bus to train with only minutes layover, which I use to visit the ATM). I think back then I did 3 or 4 runs in quick succession, and those went much better.

I really liked the writing, and some of the routes I took were quite memorable. Can only recommend the North Pole. There was also a murder case on some airship from South America (I think) that unfortunately I could not solve.

Anyway, I still have the game installed, as there’s still stuff left to discover. I’m also a big fan of Inkle since then. And I did actually read 80 Days, the novel afterwards

. Must say it sports a surprisingly modern word-view for something that’s about 150 years old. I’ve read stuff half that age that is much more dated in comparison (yes, I mean you, Mr. Heinlein!).