With all those old ad-adventure games setting precedent, they really should have made that Indy Crystal Skull p&c adventure game to promote the film… hehe

The updated requirements are in the link. This game from what I can see from screenshots, does not have visible verbs etc.

You can add “Fenimore Fillmore: 3 skulls of the toltecs”, now available in a remake also: https://store.steampowered.com/app/977300/Fenimore_Fillmore_3_Skulls_of_the_Toltecs/

oops, I just noticed it was already listed as “3 skulls of the toltecs” (without “fenimore fillmore”)

I guess there is another one: Cosmic Spacehead for Game Gear and Mega Drive. I just played it last weekend on the Game Gear (not an emulator) and find it lovely. It is amazing how they managed to implement it for the game gear considering the extremely limited hardware.

The game is a verb based graphical adventure with jump&run passages between locations (you don’t have to repeat the J&R mini-game when changing location again).

Btw. If you like retro 8-bit sega consoles, then checkout http://www.smspower.org/ Some people develope new games for the game gear.

The verbs seems to pop as a context menu when you hover over something. So doesn’t fit the requirements.

The verb system is always on the screen but you press button A or B to iterate through the verbs. There are only 5 verbs I think + the “empty word” so this iteration is very efficient. Probably the “empty word” is what seemed like a context menu, but you explicitly select it. The set of verbs is fixed throughout the game and you can apply every verb on every clickable object in the environment and on every object in the inventory.

Feel free to decide if you want to add it or not. But in my opinion the game feels similar to Zak, TWP, and so on, but is a much smaller game and has those J&R passages (and a small mini-game which is fun).

Since the verbs are not presented simultanious, I think it should not go on the list.

The way I play MM/Zak/TWP the verbs might just as well not be on the screen. Strictly interpreting it as five verbs “visible on screen” is your prerogative, but to me it wouldn’t align with how I interpreted the spirit of the page when I saw it.

I.e., at least five verbs is a more or less arbitrary number (rationale would be interesting) that implies puzzles of possibly slightly greater complexity than just use/look/talk. Of course I realize the page says “à la Maniac Mansion” as well as the “visible on screen” phrase I already quoted above, but making it strictly about verbs rather than actions makes it just a list of MM clones rather than traditional 2D point & click adventures of a certain complexity.

Skimming this thread a little I see this was tangentially addressed a year and a half ago:

Maybe that makes it my own list of personal preference for Point’n’Click games, but I hope not.

To which I would reply that it very, very much does.

DotT Remastered does some extremely problematic things with the action selection interface (they switch places!) but it also clearly shows how it would be the exact same verb-interface game underneath if it didn’t do that. In my mind it is also disqualified from the list, but only for its bizarre behavior and not for having this theoretically nice, efficient action selection method.

Note that the keyboard shortcuts remain unaffected, and therefore I don’t notice it that much except with a gamepad.

The list of games would be 10000s if I had not got some criteria.

As for what the criterias is, yes I just chose what I feel give it that mood/spirit of TWP/Zak. Maybe it comes from my own nostalgia don’t know.

Of course, but the difference DotT and DotT is a difference without distinction. It’s quite literally the same game with the same puzzles. If I were to make a list of MM clones I enjoy, for example, my first action would be to scratch Yorkshire Gubbins and doubtless many others from your list because they can only be controlled with the mouse. In that sense your list isn’t nearly strict enough.

Yorkshire Gubbins doesn’t respond to arrow keys for dialogs, nor does it have the MM/Zak/TWP QWE/ASD/ZXC scheme, nor the Indiana Jones/MI P=pick up, Y=yank, etc. scheme. All of which I must emphasize DotT Remastered does have. I strongly suspect most post-2000 entries on your list and many prior immediately disqualify as proper MM clones for that reason.

Although I most assuredly dislike MM clones that forget about MM’s keyboard controls, I still think it would be grossly unfair to exclude Yorkshire Gubbins for it. It’s not at all comparable to excluding MI3 because it has simplified the interface to 3 actions, which affects the puzzles & flow of the game.

This looks interesting! I will have to try it out some time.

Stumbled across this one. Anybody play or heard of it?
https://replayers.org/scummvm/bud-tucker-in-double-trouble/

Anybody play or heard of it?

I’ve heard of it, but never played it.

You can play it on the Internet Archive (and download it there, as it seems):

I think a friend of mine had it. But I’m sure I’ve never played it, so probably we just saw an ad for it and never found it in any store.

Good find, it is already on the list since a while though.

Although Icons instead of the verbs I think Gabrielle Night could fit in this list.

Gabriel Knight is a series of point-and-click adventure games developed and released by Sierra On-Line in the 1990s. The Gabriel Knight characters and games were created by writer Jane Jensen, who also worked on King's Quest VI: Heir Today, Gone Tomorrow with veteran game designer Roberta Williams. The music in the series was composed by Robert Holmes, Jensen's husband. All three games in the series focus on the adventures of Gabriel Knight, a New Orleans author and bookstore owner who finds ...

The Castle,
A gem for the click and point lovers. 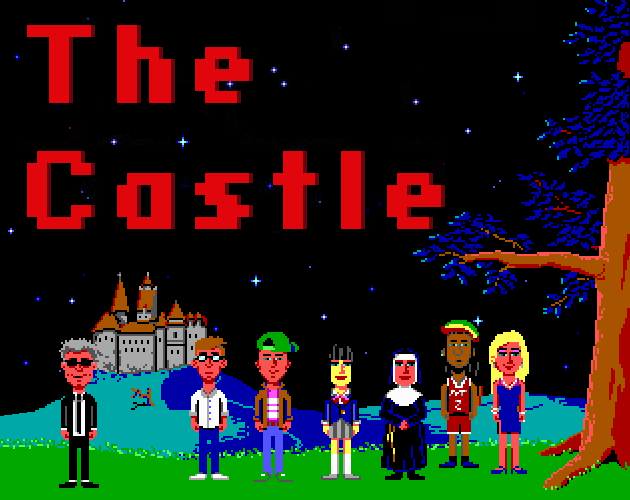 The Castle by Carles

Drm free and playable also in 320x200 for retrogamers

Yeah, there is a dedicated thread to this game:

Purchased and played tonight! It’s cool, made with AGS, above average in technical details, but good to play, good humour and with thrilling suspense! I think I’m stuck. I have all the players captured, and sent in three different “jails”. I chosen Agent L and the student who knows 5 languages. Where are you, @seguso ?