Sorry, double-post. I also agree with that. There is a theory - from Dominic Armato himself, actually - that Boybrush is actually him from the past.
Like MI2 insinuated, he was an orphan imagining stuff while going to an amusement park. While growing up, it got difficult for him to differentiate reality and fantasy.
Him talking to his younger self is a way for him to finally let go. Elaine and Boybrush leave and he’s alone on his bench, finally at peace.
Of course, it’s just one interpretation.
I love that the game allows us to have multiple ones… and all of them could be correct.

Yeah, to me it seemed like a mother/son relationship in a way at the end. But then, it also seemed like that throughout the game to some degree.

That’s interesting about Dominic’s theory. Is he tweeting about it?

he’s mostly shocked that everything is over, not that he’s in an amusement park.

He says to Elaine, “I don’t know where I am all of the sudden.”

Well now we know why the art style was chosen! All the characters except Guybrush, Elaine, and Stan are literally cardboard cut outs in a theme park.

There are also cardboard cutouts of Guybrush, Elaine, and Stan. Not in game, but in our world. How do we know for sure who is “real” and who is a “cutout”? And are they mutually exclusive? 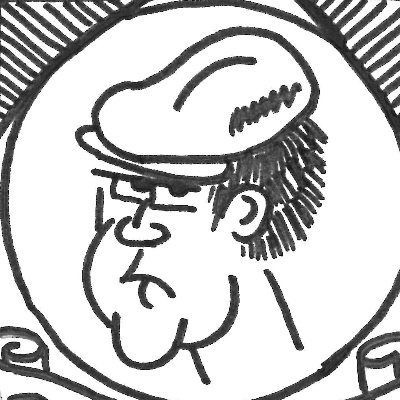 @grumpygamer
Stan followed me home. Should I be afraid? https://t.co/oIAmbHVMPH 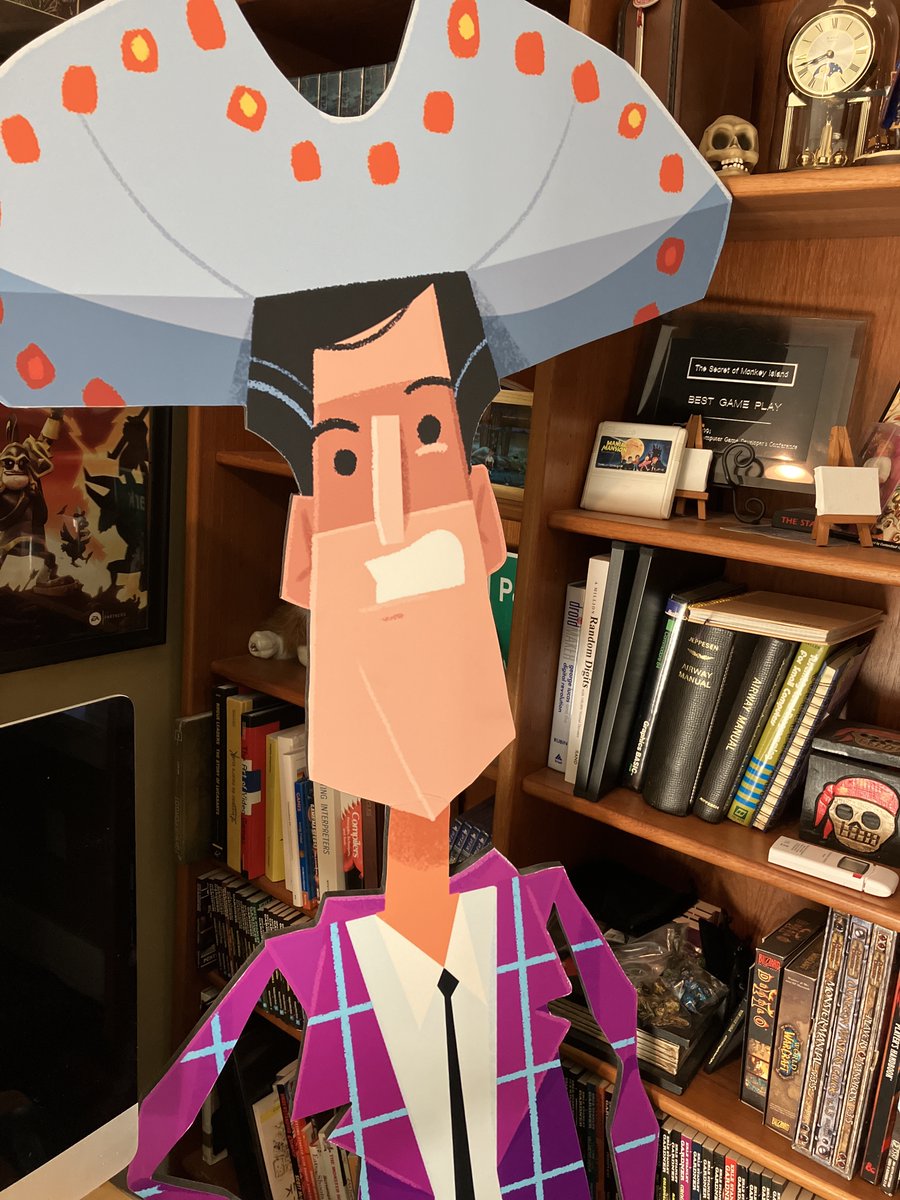 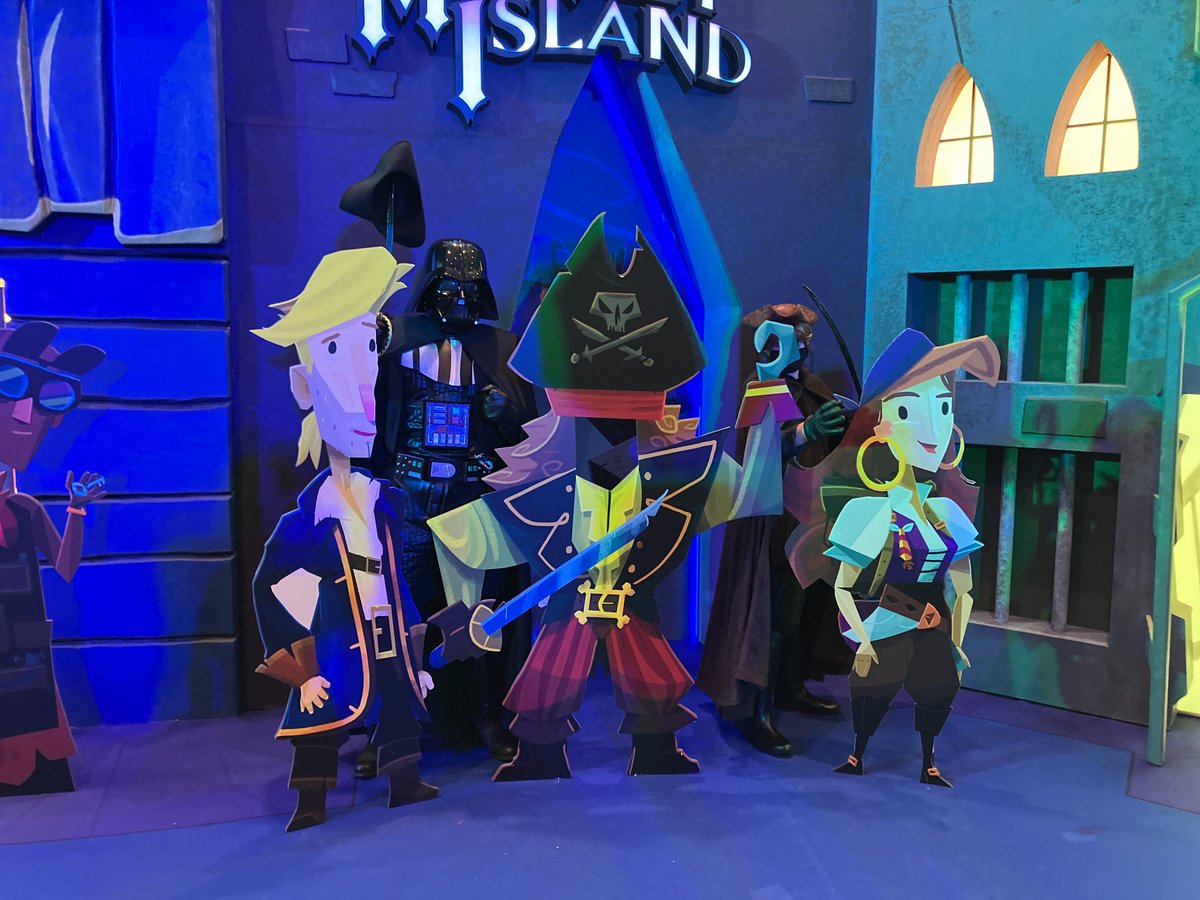 Are these cutouts just promotional material that shouldnt be considered in interpretation? I do think they are worth consideration, as a meta narrative can include real objects. The game includes the SOMI codewheel after all, and we also need to consider a real object to understand that.

But I can see people disagreeing here.

The game includes the SOMI codewheel after all

It was great how they incorporated the code wheel. I kind of wish it was a more accurate representation of the original. I was secretly hoping that after you solve the puzzle, it reboots you into the MI1 game.

Are these cutouts just promotional material that shouldnt be considered in interpretation?

There are definitely intentional connections between the game and real-life cardboard cutouts: for example you can take a photo as that pirate both in real life and in the game.

The “Original Secret” was “kids in an amusement park” and people in real life had a chance to be part of it.

Still, you are writing here.

…I don’t THINK a real-world cutscene showed my house empty and my children never born.

I interpreted it more like: “I didn’t know this ride led to this part of the park.”

A bit unrelated… It’s interesting, because when Guybrush says, “Not yet”, it’s translated in French as, “Pas encore.”

“Pas encore” can either mean “not yet”… or “not again”. I realize that I first thought he said, “Not again”, which has a completely different meaning. I interpreted it as, “Again with this twist?” or “Again, I’m in a park?!?”

It’s just a translation “issue” - not even an issue, just an ambiguity - but still, it’s interesting.

It was great how they incorporated the code wheel. I kind of wish it was a more accurate representation of the original. I was secretly hoping that after you solve the puzzle, it reboots you into the MI1 game.

I had so much trouble with the code wheel puzzle! But I think it was more a case of endgame nerves than anything. It truely was the final boss.

Its not an accurate representation because its a homemade wheel. Guybrush pirated MI1 and drew his own wheel so he could play the game. (Not really of course. This is my fanfiction.)

There are definitely intentional connections between the game and real-life cardboard cutouts: for example you can take a photo as that pirate both in real life and in the game.

The “Original Secret” was “kids in an amusement park” and people in real life had a chance to be part of it.

Yes, thats how I feel. It was lovely and so cool.

The locksmith was holding the key to the secret all along, at the promotional displays! That was so cool!

It’s a shame MI wasn’t a bigger franchise, and didn’t get to have a world tour. But I’m happy (jealous) of the fans who got to experience that element of the story.

And I think about the bystanders who must have taken a pirate photo at the con for shits and giggles and didn’t really care about MI or Lore. I love them for that, too. Everyone has fun with the ride in their own way, after all.

The locksmith was holding the key to the secret all along, at the promotional displays! That was so cool!

That’s what I thought, but my obsession for details made me check if it was indeed the same key depicted in the game and it isn’t.

oh no, its for ANOTHER SECRET! Sequel bait!

Did you find a trivia card mentioning “Cogg Island” ?
The correct answer is always the fourth, and it’s a map coordinate, randomly set at startup.
e.g.: F.6

To discover the island you must click once on the map at the given coordinates. Then, double-click on your ship.
Pull down the anchor, go down and enjoy the island!

It’s an easter egg, you should save before going down, because you can’t go up again.

Some question I got while playing:

Some Watsonian answers, even if Doylist answers are more likely:

But my followup question: Stan hasn’t been at his shipyard since 1991 at the very least. If we count Escape: then who decided to re-add Stan’s sign and allow it to get dilapidated, and why were his personal items still in the building even after the Mêlée bureaucracy took over before EMI? And if we don’t count Escape: then did nobody take over this shipyard when Stan left? Stan acknowledged being a lawyer from Tales; are we to understand that he’s owned this shipyard property despite being absent from it and having unrelated careers for decades?
I think the clear answer is what the Prologue gives us: unreliable narrators built upon other unreliabke narrators!

Related: I’m still surprised Guybrush would expect the old Pirate Leaders to have any standing after they fled in terror to LeChuck landing at the end of Part 1, and were never seen again. But of course, I’m also surprised that nobody’s slightly frightened when LeChuck pulls up to the docks this time. Unreliable narrators built upon other unreliable narrators!

Why a rootbeer trap for LeChuck? We know since Monkey 2 that rootbeer only works on ghosts.

The recipe to Monkey Island serves a crew of 4. With a bigger crew, don’t we need more of the ingredients then, ie. at least 2 pressed skulls?

Well, the recipe says “Serves crew of four” but it doesn’t specify four of what. If it was intended for four living people, then LeChuck’s crew is OK.

What happened to the Lua bar?

The same thing that happened to giant monkey robots. They never existed in my personal canon and I’m glad that they were simply ignored in RtMI.