Where is Guybrush coming from when he arrives at the Lookout Point at the start of TSOMI?

Who put that up there, by the way?

But who knows, maybe he’s just a poor guy tied to a chair somewhere in a lab, subjected to cruel brain experiments that cause funny “dreams”.

Stop it, you reminded me of Call of Duty: Black Ops.

(Isn’t there a yawning smiley?)

Does that make Monkey Island a Battle Royale game?

In Battle Royale you are gassed and wake up on the battlefieldMêlée Island.

Well we’re shown in EMI that he washed ashore Melee Island before walking up to the lookout in SMI, and he doesn’t seem to be familiar with the Tri-Island Area or Gulf of Melange, so he’s probably from another island group or from the American colonies or something. I like to think he was working for a company as a fisherman but was never content with the job (as in the never-made, official, non-canonical Monkey Island movie), and perhaps a storm sunk his fishing ship one day, leading to him end up on Melee. Perhaps he had always been interested in pirates all his life, and so his washing ashore in a new land was the perfect start for a new life for him to become one, or maybe he was inspired by something he saw or something that happened before his ship sunk.

Perhaps he had always been interested in pirates all his life, and so his washing ashore in a new land was the perfect start for a new life for him to become one

I had always assumed that he set out for Melee, knowing full well that it was a pirate nest, because announcing to random islanders that you want to be a pirate doesn’t sound like such a clever idea. OTOH, washing up on a pirate-infested island first and then thinking about a career change isn’t so stupid either

Though I still have the impression that it must be the former, because he’s really pouring his heart into the whole ordeal.

I got a feeling he thought a pirate infested island called Melee would be the best place to learn some melee ( =close contact = fencing) combat techniques.

Or, he is just an illiterate boy, not uncommon in those days and was looking for the second-greatest-Legend of all time after Big Whoop when he washed up on Mêlée’s shores: the Real Mêllée Vanêllée!

Before washing up on the shores of Mêlée Island [1], declaring that he would like to be a pirate [2], and making the hike to the Lookout Point seeking instruction in his chosen craft of pirating [3, 4], Guybrush Threepwood was from the Old World [5]. He had been abandoned by his parents (or so he thought; it may have been their deaths that separated them from him) [6, 7], but not before Guybrush’s mother had had time to try to get him to practice the piano, which he would later regret that he did not ever do [8]. But he was likely in an orphanage from a very young age [9].

It would become naive, young Guybrush’s life’s ambition to become a fierce, swashbuckling, bloodthirsty pirate [10]. He may have even lived on his own in a miniature-pirate-ship-styled houseboat and dressed in pirate costumes, discontent with his job, which he would have daily threatened to quit (only to not be taken seriously by his boss, of course) [11]. And during the Golden Age of Piracy in the late 1600’s, pirates were secure in their Caribbean strongholds, amassing huge fortunes from plundering shipments of New World gold; these tales of pirate wealth thus attracted Guybrush, as well as many other adventurers [5], and his travels led him – fresh from the Old World – to Mêlée Island (somewhere in the Caribbean) in a quest to fulfill his dream [5, 10].

But something must have caused the ship Guybrush was on to sink before he was able to safely reach Mêlée’s harbor in it, resulting in his washing ashore, leaving him alone in a new land where no one knew who he was or where he had come from, and with no money [1, 3, 5]. But what he did have were high hopes and an insatiable curiosity and desire to become a pirate [5, 12], though he was not yet truly aware that there was more to being a pirate than simply swinging a sword and drinking grog [10]

I did some research, and there’s the definitive, canonical answer. I wonder if anyone could deduce which part of the Old World Guybrush would be from, or any other possible details of his life, using the information we have been officially given

Governor Horatio Torquemada Marley notwithstanding, the names around the Tri-Island area give off an Anglo-French vibe, which fits with the Anglo-French-Dutch buccaneers. There’s some confusion there in captain René Rottingham speaking with a French accent. We could interpret Rottingham’s accent as English based on his surname, making the “neutral” accents and therefore Guybrush French. Yes yes, I’m surethe accents are merely there for humorous effect, hush.

So if Guybrush is from the Old World, it would seem he’s British, probably English.

So hold on, I’m a little confused. Tell me if I understand you correctly: Rottingham speaks with a French accent, but based on his name should be English, so you’re imagining his accent is “actually” English, and based on that, those without accents, like Guybrush, should be French, so you conclude Guybrush is English? I don’t understand any of this, haha…

If Rottingham has an English accent, that would probably make Guybrush (and everybody else) French. There’s a variety of supporting evidence to be found, perhaps most notably LeChuck and Mêlée.

If Rottingham has a French accent, that would most likely make Guybrush English.

The less likely hypothesis is that Guybrush is Dutch, since it seems to require adding additional assumptions. E.g., he’s a French Huguenot refugee to the Dutch republic and/or he speaks fluent (near-) accent-free English/French. If Guybrush is a French-Dutch Huguenot, that would explain his sense of disenfranchisement and dislocation, as well as his effortless multilingualism. This is my head-canon.

Or of course, everyone is Dutch. That would explain various seemingly more “American” names like Herman Toothrot and Stan the Dutch salesman with his VOC mentality.

Ah, I see! Well thought-out! Seeing as the name Threepwood seems to be of English origin, I’m going to go with Guybrush being English.

Edit: Or then again, maybe it’s Scottish! https://en.m.wikipedia.org/wiki/Lands_of_Threepwood
We know Guybrush’s name ultimately comes from the “Threepwood cottage” in Emsworth that inspired the name of PG Wodehouse’s characters in the stories he wrote (https://en.m.wikipedia.org/wiki/Lord_Emsworth) that inspired the name of the D&D character that in turn inspired Guybrush’s name, which is a English location, though, but the origin of Threepwood in the Scottish Lands of Threepwood seems Scottish, so maybe that was a Scottish-owned cottage? Or should we just say “British” to be general and safe?

Either way, I think the safest bet of assuming people’s national origins - at least in the case of those without specific accents - is to go with the origin of their surnames, most likely, as they could have simply learned to lose the accent when they came to the New World, canonically. So Guybrush should be either English or Scottish, depending on the true origin of the name of Threepwood Cottage in Emsworth.

Guybrush comes none other than from the German town of Rothenburg ob der Tauber.
Then he felt asleep and was catapulted onto the Lookout. 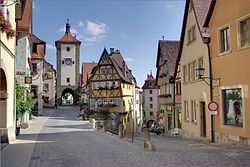 Rothenburg ob der Tauber (German pronunciation: [ˈʁoːtn̩bʊɐ̯k ɔp deːɐ̯ ˈtaʊbɐ] (listen)) is a town in the district of Ansbach of Mittelfranken (Middle Franconia), the Franconia region of Bavaria, Germany. It is well known for its well-preserved medieval old town, a destination for tourists from around the world. It is part of the popular Romantic Road through southern Germany. Rothenburg was a Free Imperial City from the late Middle Ages to 1803. In 1884 Johann Friedrich (von) Hessing (1838-1918...

Or of course, everyone is Dutch. That would explain various seemingly more “American” names like Herman Toothrot and Stan the Dutch salesman with his VOC mentality.

I am telling ya, my Dutch translation of the game is canon!
Working on getting that in the Ultimate Talkie Edition right now, by the way, which gives it a subtitled movie quality.

Either way, I think the safest bet of assuming people’s national origins - at least in the case of those without specific accents - is to go with the origin of their surnames, most likely, as they could have simply learned to lose the accent when they came to the New World, canonically.

That might require the fewest assumptions, but it also partially depends on the frequency by which buccaneers took on pirate names. For example, the Dutch buccaneer Gerrit Gerritszoon rebranded himself as Roc Brasiliano. The French pirate Pierre François is known in English as Peter Francis. The French or French-Dutch pirate Guybrosse Troispebois is anglicized as Guybrush Threepwood, Élaine Marly as Elaine Marley, you get the idea. If the setting is French but not intended to come across as foreign, such anglicization could well be expected.

Clearly, Guybrush is from Germany and his real name was Kai Dreiholz (Dreiholz -> three wood) or Kai Treibholz (driftwood).

The German sailors would often yell “Kai, Bursche!”, when he had to swab the deck. Then Kai would look and ask around for his brush. Therefore, the English sailors gave him nicknames like Guybursche or Guy with the brush / Guybrush.

His last name was eventually anglicised to “Threepwood” when he arrived at the Caribbean.

No, he was obviously italian. His name was Guidobaldo Trippodo*. It became Guybald Threepwood, but since they noticed he wasn’t bald at all, they thought that “brush” (in the early days he had very short hair) fitted better.

man, this whole thread is getting weirder every minute

(*) both this first and last Italian names actually exist

Hmm, that’s a good point. But I’m thinking the creators of the game were working under the impression that these were everyone’s true names, which would make that the case, then, canonically, I would argue.