and in real life they´re not pixelated.

No, I´d be fine with them all sitting at a desk at the radio station.

To clarify: It would fine for me too. For me even only showing the heads would be enough.

I met Ron Gilbert in person once, and it was pixelated at a very high level of definition, I must say, it was almost REAL !

What´s the name of that particular fallacy again?

Anway, I was really very close. I almost went to munich earlier this year.

To clarify: It would fine for me too. For me even only showing the heads would be enough.

All of this reminds me of the ending of the original kickstarter video. 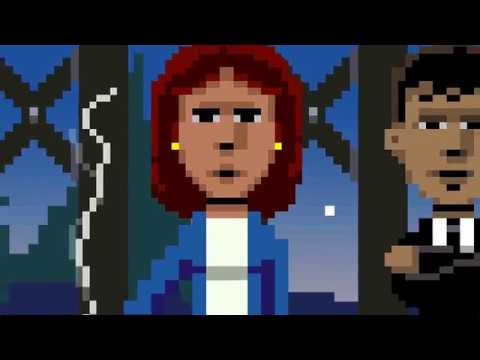 What did it feel to you when you first listened to the podcasts?

On the dev blog, they postet photos from their working places. Of course, we could create images based on these photos.

David´s office looks real nice, I love all that wood!

Also we now know why there is a Temple Of Doom poster there.

I’m perfectly aware of everything you write, and I agree. I don’t find it boring, in English it’s not easy to find the right nuance in order not to be misunderstood.

In italian I wouldn’t have said “to make it less boring”, but “per renderlo più movimentato”. Same concept, different feelings.

I endorsed yet for the transcript. They are faster and less distracting for me.
But I also said that videos with captions are a good occasion for me to improve listening comprehension.
Images are just an added value.
Anyway, I know that my idea would be impossible since time consuming.

An example with the Back to the Future clocks, with different colors of the text for each speaker, with location. They show date and time when the podcast originally aired.

Also in the radio station speakers could seat and show only the upper half of the body (easy to complete).

This picture is also accidentally nice for the characters staring at their creators (when they will be there ) trough the glass.

To emphasize the current speaker, as besmaller asked, the three (exceptionally four) spotlights could be used. When a speaker talks, the spotlight above him becomes brighter.

It’s not a bad idea. Though, the items on the console (and possibly the crack in the window as well) would have to be removed. Elsewise, the faces would be partially covered by them.

By the way, I partially agree with @Gffp that a split screen would be better, because they occasionally talked about their different locations during the podcasts. But the selection (or creation) of appropriate room screens would be difficult. Also, Ron has moved in between. Would we really like to use different screens for different podcasts, depending on who was where at that time?

Also wasn´t there at least one occasion where he was interrupted by the dog? Would that have to be included somehow, too?

Aha! To make it more interesting. Or more captivating.

I can get you layered version of those rooms if you need, just DM me.

Also wasn´t there at least one occasion where he was interrupted by the dog?

Yes. In the podcast Ron played the elevator music during his absence.

Would that have to be included somehow, too?

You can show a simple text card with “Program interrupted” or something similar while the elevator music plays. Something like this:

You can show a simple text card with “Program interrupted”

The sound was less pleasant, though…

I would like to create an interruption screen featuring Spiffy.

When a speaker talks, the spotlight above him becomes brighter.

Though, the items on the console (and possibly the crack in the window as well) would have to be removed. Elsewise, the faces would be partially covered by them.

I wouldn’t dislike seeing them in the broken radio booth, even if the cracks might partially cover their faces. I like the idea of putting them in the decadent Thimbleweed Park.

But we could just test a few different things and see what looks better.

Wow, seems what started out as “Text Versions of Podcasts” somehow turned into kinda the complete opposite. I´m liking this a lot!

(this thread is about to become the longest ever)

The topic about the alleged death of the genre will be surpassed by an extremely lively discussion and enthusiastic activity!