Funny shitty games (not from Ron)

I’m super exited because Ron is working on a new shitty game with funny sounds:

I can’t wait to see the shitty feelies in the boxed version.

Anyway. His tweet let me thought about the shittiest game I have ever played, that I could laugh about. I think it was “Pickle Wars”, a jump and run game, released in the mid-90s. You have to collect, well, pickles and the sound was horrible. But it was extreme crazy. My brother and I couldn’t stop laughing while playing this game.

So I would like to know: What was your shittiest game that you ever played? If you can name more than one: What was the most funniest (of them)?

You know, I only just remember.

There was a game for the Amgia, that was based on Little Red Riding Hood. It was somewhat of an educational game as well, and it had hilariously terrible voice acting. There was a part where you could just click on various forest animals and someone would read their names out loud to you in the most outlandish voice. I still vividly remember “das Eich-hööööööörnchen”.

Translation for non-german speaker: “the Squ-iiiiiiiiiiirel”.

I had to look up more screenshots, to confirm for myself. Yes, that was it!

I wonder if the voice acting is equally weird in other languages. Considering it was the Amiga having any kind of voice acting at all was a novelty in and off itself.

The credits say music by Moby. Not THE Moby, though right?

This one, by far:

“The Fabulous Wanda and the Secret of Life, the Universe, and Everything”

Somewhat inspired by “The Hitchhiker’s Guide to the Galaxy”, it’s some sort of an adventure game: you have to visit places, talk with people, play mini-games and get money. The final goal is to find what the “Secret of Life, the Universe, and Everything” is from the only person who knows it: the fabulous Wanda.

When I was a kid I played this game for a lot of time, reaching a point in which a character told me that I hadn’t enough money to know the secret. So I played the mini-games again to get more money, but it was never enough to satisfy the requests of that character.

After a lot of time spent to accumulate a little fortune and yet another rejection from that character I lost my patience and read the code of the game, discovering that there was no way to progress it: the quantity of collected money was completely irrelevant and that character would have always told me that it wasn’t enough to know the secret.

The only way to end the game was to die or to exit the game.

Nowadays you’ll find some reviews of this game that highlight the philosophical meanings of this design choice, but back then I was just a kid and I was extremely pissed off by the fact that you couldn’t win.

The credits say music by Moby. Not THE Moby, though right?

No. It seems that it was this guy: Moby was the moniker used by French Amiga demo scene and game soundtrack musician Frédéric Motte during the early nineties.

No. It seems that it was this guy:

I remember Moby. He had to change his nickname to “El Mobo”, to avoid any confusion with the more famous artist.

My favourite Amiga mod by him: 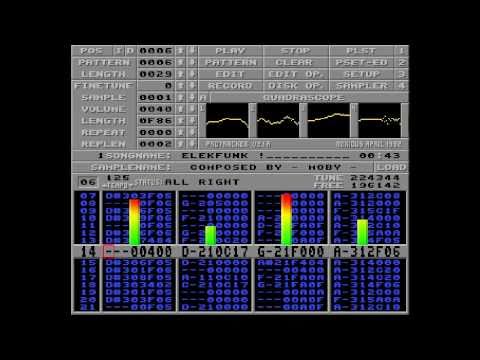 Hey some of that is really not too bad! Few Amiga games managed to continue to have a musical style similar to the stuff they did with the SID on the C64, and there is a few among those (like the 2nd tune in that video starting at 2:41 minutes in for instance).

I remember Moby. He had to change his nickname to “El Mobo”, to avoid any confusion with the more famous artist.

Wouldn´t surprise me, because the american musician rose to prominence around that same time (early 90s).

“The Fabulous Wanda and the Secret of Life, the Universe, and Everything”

Cool, I never heard of that game. Looks “interesting”.

Nowadays you’ll find some reviews of this game that highlight the philosophical meanings of this design choice, but back then I was just a kid and I was extremely pissed off by the fact that you couldn’t win.

Accodring to the following video, the game “was named by Rob Hubbard as one of his all-time fave C64 games.”

The funniest shitty game I’ve ever played is Happy Wheels, playable online.
You have to drive your character from start to finish, avoiding any sort of hazard.

Warning: your character could be seriously and hilariously injured!

Hahah, wasted a lot of hours on that one back in the day.

Your game reminds me of Elasto Mania which I played quite some time. It looks like its non-violent predecessor: