How did you discover Thimbleweed Park?

For me it was one of the LucasArts fan sites (either ScummVM or The Scumm Bar, I can’t remember exactly).

I’ve been a fan of Sierra graphic adventures since the 1990s, barely knew about LucasFilms games except for the Day Of The Tentacle, which I played with a friend back in the 1990s and loved it. That game took me eventually to learn about Maniac Mansion and other SCUMM games.

Still, my nostalgia was attached to the Sierra games, mostly the Leisure Suite Larry and Space Quest games, of which I own the entire series and play at least every other year.

Anyhoo… I was a backer of the Space Venture project from the guys who made the Space Quest games, and I was very excited. That project entered “development hell” and never came out. I was very disappointed and sort of crushed that the developers took so much money and squandered it so miserably.

In the midst of all that, I was recommended Thimbleweed Park by the Kickstarter page. At first I was skeptical because I didn’t know who Ron Gilbert and Gary Winnick were, nor was I very familiar with their work. In fact, my favourite LucasFilm game, Day Of The Tentacle, is not even to his credit.

Nonetheless, considering that I love adventure games, I signed up and pledged. I missed the Kickstarter by a few days, so I used Humble Bundle.

After that, I started reading up on Mr. Gilbert and his work, and tried playing Maniac Mansion.

It was the development blog that sold me. That and the failure from the old Sierra guys to produce anything for years, endeared me to the Thimbleweed Park project. The more I read about Mr. Gilbert’s design philosophies and his development progress, the more I felt convinced that LucasFilms were the better games. I can respect them more and they are much more enjoyable and less frustrating that Sierra’s. I still prefer the old Sierra games, but by now it’s mostly due to nostalgia.

So, in the end, I am a convert. I’d like to think I am precisely part of the target audience for this game: someone who likes old games, enjoys adventure games, but by no means a hardcore adventurer or gamer at all. In short, a new customer not a die-hard fan.

In that sense, Thimbleweed Park delivers: It is now one of my favourite adventure games, and I can certainly see it as part of those few games I like to re-play once in a while. It is not perfect, and there are some things about it that annoy me, particularly the end-game, but the overall experience has many more positives.

Well, it didn’t come out yet. But I’m sure it will, eventually.

Well, it didn’t come out yet. But I’m sure it will, eventually.

I imagine it will. However, by now it’s been several years and in the meantime, Terrible Toybox started a Kickstarter, created a game engine essentially from scratch, developed an entire adventure game with voice acting and high quality writing and artwork, and released it to the public – and all the time blogging and podcasting about it with the community of backers!

My adventure game heroes have been replaced*.

But I also don’t care if projects take (really) long, as long as they can afford it and will deliver eventually.

But I also don’t care if projects take (really) long, as long as they can afford it and will deliver eventually.

Well, taking too long is not a problem to me. Failing to deliver because of mismanagement is. This is off-topic, of course, but it struck me as odd when Space Venture changed game engines various times and couldn’t seem to pin down its technology or design approach. That can burn through a project’s budget very quickly.

Mr. Gilbert has a very impressive track record of managing development projects and Thimbleweed Park just benefited greatly from his hand. (Not to mention his design philosophy, technical talent, and creative prowess.)

I knew about the game from several forums I visit frequently enough. I rarely visit blogs, kickstarter, twitter or facebook sites, unless linked to there from a forum’s post. The Timbleweed blog however, I did visit quite frequently.

He is totally dedicated to his art. (Or, as Gary Winnick would put it, he has “no life”.)

I discovered TWP reading a series of articles about classic adventure games by Kosta Andreadis on IGN: 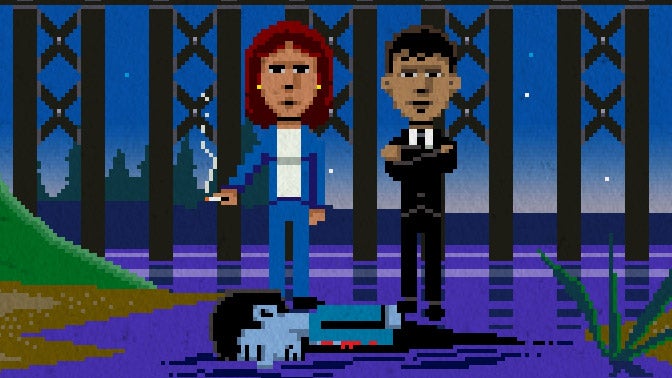 On Thimbleweed Park and the Golden Era of LucasArts - IGN

Chatting with Ron Gilbert and Gary Winnick about returning to the genre they love and the science of comedy in gaming.

I found those articles by chance, googling “monkey island”. I occasionally do that when I have spare time and want to read something about my favorite games. I love classic adventure games since my childhood, but I usually don’t spend time following adventure gaming sites, Ron’s blog or new kickstarter projects.

Since I found those articles at the beginning of 2015, after the closing of the Kickstarter campaign, I was very happy to find out I could back TWP using Pledgemanager. And I followed the development blog through the entire project; I enjoyed it a lot.

Regrettably, I was not an original backer, but discovered Thimbleweed Park only 2-3 months before it was released. I was searching “Maniac Mansion” on google (not something I normally do, but just felt like it that day), and I found some articles that mentioned the new project by the original creators. It was like a dream come true! I only had to wait a couple months to play it, so my expectations were different than those that had been tracking the project for 2 years.

I was not a backer because I didn’t find out until after it was funded and in development. I kinda… took a break from gaming news for a long time. It has some very opinionated, scary people lurking and I’m too old to fight with people on the internet.

My husband told me about this “funny, pixel game that looks like the ones you loved to play” one day and showed me the trailer. Within seconds, I was going, “Whaaaaaaaa Ron GibbglibbbGILBERT oh boy oh boy oh boy!” And when I finally calmed down, I explained how he was so awesome and Maniac Mansion was the best ever, and oh man old adventure games were my life! And so on…

Basically, I’ve always loved adventure games and anything made by him is at the top of my list. Also hi! I’m new!

Sometimes I think that following the project from the beginning deprived me of special moments like the big surprise that you experienced. It must have been really electrifying.

Indeed! That first trailer was like being transported to my childhood.

I just tend to google things like Monkey Island and Ron Gilbert every now and again. I had heard a while ago that there was a game in development but when I googled just yesterday I saw it was complete and finally after all these years it was the kind of game I really wanted.

Not a “modern twist” on the great games of old, just a new great game of old. Could hardly believe it.

Downloaded it on Steam immediately and have experienced true happiness playing it so far. Well done to all involved.

I probably heard about it first on the Grumpy Gamer blog.

I haven’t played video games regularly in almost 20 years, but because of my love for Maniac Mansion and then discovering Monkey Island a few years back, I liked to follow Ron and read behind the scenes stories. I’m in a place with video games where I don’t have much interest in playing them for more than five minutes, but I will spend a fair amount of time reading about the development and creative processes for the games that I was playing decades ago.

So, yeah. I read about it on the blog, checked out the crowdfunding dealy and dove right in.

I’m not sure… I think I found Ron Gilbert’s twitter and blog some weeks or months before the project was announced and the kickstarter started.
But it’s also possible that kickstarter recommended Thimbleweed Park to me…
Nevertheless I backed at the $25 while the kickstarter was active, but stocked up to the phonebook level after the kickstarter, because I knew I would never forgive me for not being a part of this awesome game!

(This had the psychological advantage of having to pay only $25 two times with several months inbetween!

I discovered it in November 2014, through a Facebook post, then by reading some game magazines online.
But I didn’t immediately realize that it was a fund raising campaign: I thought that the game was ready!
Then I joined Kickstarter… and followed everything of the project.

I had heard a while ago that there was a game in development but when I googled just yesterday I saw it was complete and finally after all these years it was the kind of game I really wanted.

After you’ll finish the game, it might be interesting also to check the development blog, treating it as an historical document of how the original project/idea evolved into the final result.