Suggest Sierra games that are good to start with

Early Sierra games are not only notorious for their death, but also for unwinnable situations, which is the worse part in their game design.
From Sierra, I’m most familiar with the Larry games. Larry 1 is mostly fair, but you still should save often, due to death lurking everywhere.

Larry 2 and Larry 3 have plenty of unfair design. The idea was to increase the playtime by forcing the player to restart the game from the very beginning frequently. Only very hardcore adventurers would play those without a solution at hand.

From Larry 5 on, they did it more like LucasArts and prevented any unwinnable situations altogether. You can still die, but you don’t have to save due to this, since those games always give you the retry option, to replay just the part before you died.

Larry 6 is my favorite of the original series. And the German Larry wet dream games are also great, imho.

Thanks dude, so I start with “larry 6”

I really wondered, dude, why should I die in a point-N-Click adventure game?

To be fair, there’s a smorgasbord of hilarious deaths. It’s not really my thing but I can totally see people trying to get them all. Or is Police Quest an exception to that?

Most of them are pretty tricky…
I’ve played all the Space Quest games, King’s Quest 1-6, Larry 1+2, Police Quest 1.

The later ones Sierra released are more point-n-click and don’t have a text parser, so that makes them a bit easier in some cases, I think.
King’s Quest 6 and Space Quest 4 are a couple of the best ones, to me.

I like Larry… 5, I think? The one with Passionate Patty.

Apart from Laura Bow: The Colonel’s Bequest, my first completed Sierra game was Larry 7 - Love for sail. Which is a mixed point&click + parser game with no deaths and dead ends.

I had the same feeling I have for police quest now as space quest and king’s quest, I also have to say that I play Police Quest 1 in ScummVM and it 's really unbearable, wherever I click it goes the exact opposite, I hope I dont have this problem in Space Quest and King’s Quest, thank you

I finished "Robin hood conquest of the longbow " without hints. It is fair and has incredible graphics

suggest Sierra games that are good to start with.

GK2 is decent too.

Freddy Pharkas: Frontier Pharmacist is my favourite. Be sure to pack a hintbook though. There’s a nice making of Freddy Pharkas feature in Retro Gamer 222.

All I can tell you is that my favorite Sierra game when I was 11 years old was king’s quest 5. followed by Space Quest 4, and quest for glory 1

Woodruff and the schnibble of Azimuth 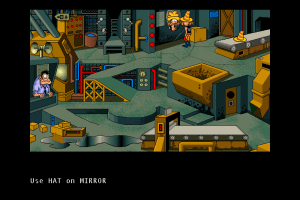 The Bizarre Adventures of Woodruff and the Schnibble (Windows 3.x)

Remember The Bizarre Adventures of Woodruff and the Schnibble (Windows 3.x), an old video game from 1995? Download it and play again on MyAbandonware.

It runs on ScummVM

Woodruff and the schnibble of Azimuth

That’s not a Sierra adventure - Sierra was only the publisher.

Police Quests are fun and was scary for me when I was a kid.
Space Quests are fun too. Colonel Bequest and Lara Bow (its second game) are good detective adventures.
King’s Quests are what make Sierra famous so definitely worth a try, start with the original one’s remake.

Old Quest games work with parser, newer ones like King Quest V and onwards point and click.
If you get to more modern times, Phantasmagoria, it’s not classical sierra adventure but its FMV but its music is out of this world and story is so gory. a big accomplishment for its time. My name is from that game! I fell in love with it when it came out in '95 and after I got introduced to the Internet in the next year I picked at my name everywhere and never changed it.

I really hated the Sierra games so I didn’t play all of their games (though I did play quite a bunch of them).

I would Say Gabriel Knight (1), I also recently played the 25th anniversary and it was really good.
Space Quest 5 is my favorite and 6 is among the satisfying ones.
Maybe King’s Quest 7 (though I didn’t play this one much).
If I remember correctly Mixed up Fairy Tales was much more friendly and I think you couldn’t die but can’t remember much of it.

, look for the Legend of Kyrandia (from Westwoods studios), they are somewhat similar to King’s Quest but they are actually good

Legend of Kyrandia was so beautiful and easier than Sierra adventures.
Oh I forgot Quest For Glory series. They were good but difficult. 3 classes with RPG elements and still an adventure game mainly. They were really ahead of their time.