Yeah. Boxes. Big Boxes, we love them.
So, this is my collection. Show yours ! 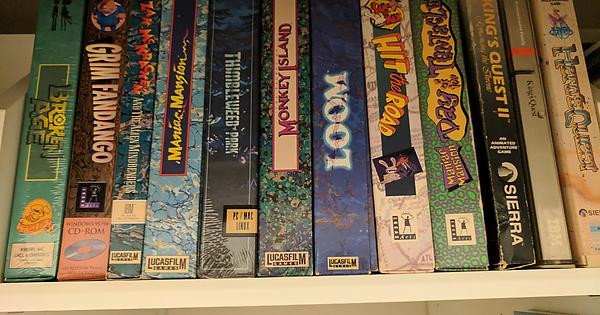 Still a work in progress.

I have these, but should get also the TWP box in December.

To celebrate the arrival of my TWP box (this morning), I thought I’d share my own collection of LFG/LA boxes.

I couldn’t find Indy3, DOTT and Grim Fandango. Really hope they’re just in my other trousers …

This is what is left of my collection.

My big box collection looks a little something like this:

This is without my XXL Red Alert box. I’ll grab another pic.

I threw out some that I regret now. The problem is, while I would love to put some of those I still have on display, there’s neither room for that, nor much understanding from my better half.

For my LA boxes a couple posts above, I had to trek down to the basement, and that’s where the TWP box ended up, too. And the Bard’s Tale IV CE that arrived today will face the same fate. Seeing a picture like below really makes me jealous, not so much for the stuff somebody has amassed, but for the space they have carved out to properly present it.

. Only have a CD from a magazine cover …

And here’s the XXL Red Alert box next to Windows 98 for scale.

I want to show some of my favourite and beloved Amiga games. Okay, “Murder on the Mississippi” is a C64 game, but I just love Adventures of the good old times. That’s probably the reason why we all are here in this forum.

@Rum_Rogers I know you never post anything on the forum, but this topic needs your contribution.

Any collection including Zak :

That Indy & The last crusade matches the boxes of Zak and MM! I want those.

I just realised that Loom upside down reads a bit like Wool (which happens to be a…you guessed it, a loom product!

Some of my most favourite Amiga games in there

The adventures are great too, of course. And is that The Settlers hiding behind the Murder box? Has to be or your collection isn’t complete

. (though Blue Byte had some other good games, too)

Thank you! Yes, it is The Settlers 1 and History Line from Blue Byte.

Absolutely, Ambermoon is the best RPG on Amiga for me too. Too bad Albion wasn’t released for Amiga anymore and also other games like Settlers II or Civilization II didn’t see the Amiga light anymore.

Pirates! Just a great simulation I already loved on my C64. You can be what every boy wanted to be a pirate who is looking for adventures, freedom, treasures and later a lovely maid.