i think time machine and sci fi is a little used already. i would like to see me trying to beat a full vandit gang, with no weapons but solving clever crazy puzzles. btw, a pirate era is all wood and water. Think about it.

Some of this sounds like “Freddy Pharkas, Frontier Pharmacist” by Al Lowe/Josh Mandel at Sierra. Such an underrated title that still holds up well today.

Freddy Pharkas: Wow, I played it for 20 mins (talkie version) and it’s a masterpiece. Incredible atmosphere and detail. Very immersive. Easily the best Sierra game ever.

I didn’t solve a puzzle yet, but it’s fantastic just to be there.

Seeing all the complications caused by the number of playable characters, it might be better to tell the story of only one guy. Also, I would like to see different places at different times of day.
MI would be a great guideline.

Assuming (and hoping) that Ron, David, and Gary (and most of the team) will continue to work together,

The new Adventures of Jason the Journalist and Teddy the boombox kid!

During the early ninetees, Jason has become a prominent journalist, well known for his articles and great reports. And it’s then that his job brings him to work on the case of a boy, known as “boombox” among his friends.
One of the first goals of Jason, while getting infos for his work, will be to help this teen-ager almost adult to keep out of troubles and find its way in life, that will be obviously to be as cool as his journalist idol!
From that moment on, the game adds the “Boombox” character, that could be used as a stooge for Jason (like in Indy 4).
Guest star Natalie!

Yeah, the boy in the lobby of the hotel was funny. He might provide a high potential as a playable character.

A game about Chuck the plant. Chuck is in so many Lucasfilm Games and even in Thimbleweed Park.
It would be super funny to do a adventure about this plant.

of course the same team, Ron, David, Gary and Mark+Octavi The problem is that finding original ideas is not easy!

of course the same team, Ron, David, Gary and Mark+Octavi The problem is that finding original ideas is not easy!

Yes, this! Same developing team and that wonderful 80s feeling. And no worries about original ideas, they will come out with something awesome.

On a side note. I wish there had been a Goonies adventure game back then, by Lucasfilm Games, of course, on the Commodore 64. Being able to pick your favorite goonies, similar to Maniac Mansion, that would have been nice.

The only Goonies game back then was this platform. I think I’ve played only once in an arcade room lately…

I remember The Goonies, I managed to escape !!!

This seems to be Ron’s opinion on this topic:

I think the world is finally ready for a Star Wars point-and-click adventure done in the Thimbleweed Park art style... twitter.com/PixelArtM/stat…

What a great idea!

I have been talking about Star Wars adventure games 2 years ago, that it would be a good idea to try. But I dont think its Ron’s cup of tea. Ron enjoys to create his own original stories.
I also seen some concept arts made by fans how it could look like if SW has been adventure game…question is, pixel art or hd? but again, its Disney

You know what would make a great setting for an adventure game?

The Hitchhiker’s guide to the galaxy universe. The Hitchhiker's Guide to the Galaxy (video game)

The Hitchhiker's Guide to the Galaxy is an interactive fiction video game based on the comedic science fiction series of the same name. It was designed by series creator Douglas Adams and Infocom's Steve Meretzky, and it was first released in 1984 for the Apple II, Macintosh, Commodore 64, CP/M, MS-DOS, Amiga, Atari 8-bit family, and Atari ST. It is Infocom's fourteenth game. The game loosely mirrors a portion of the series' plot, representing most of the events in the first book. Arthur Dent...

Was released for C64?
ZLORFIK! I missed it!

You can even play it online 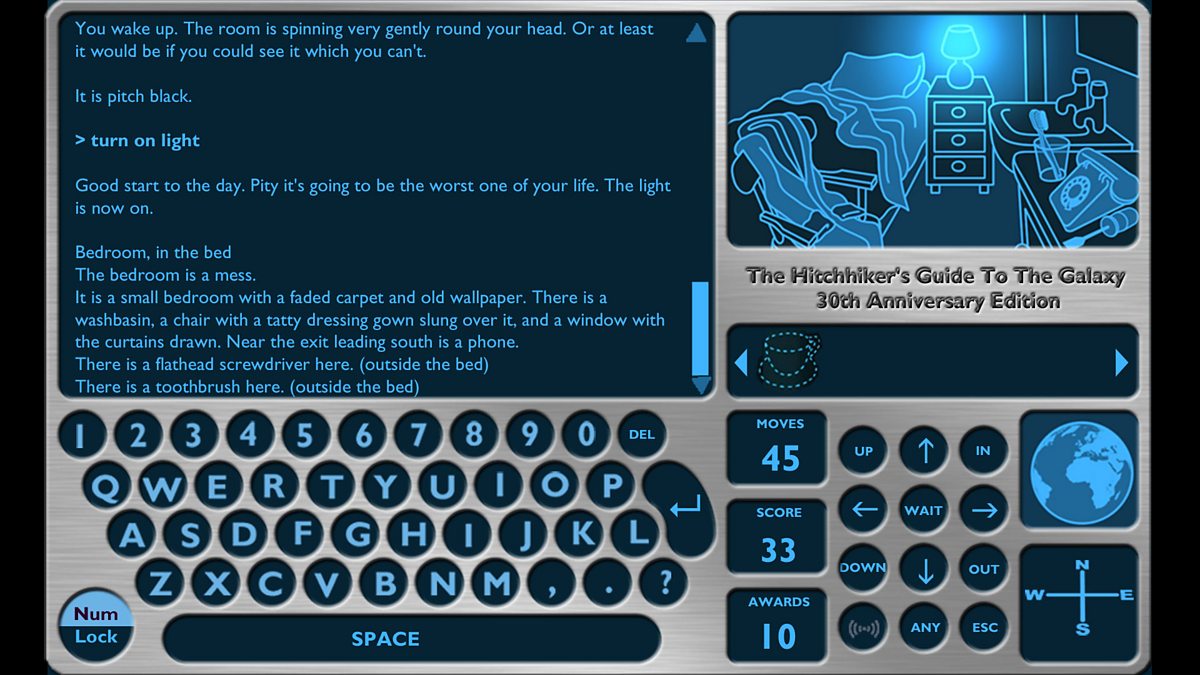 The 30th anniversary edition of the The Hitchhiker's Guide to the Galaxy game.

I have never properly done this though. For some reason the game did not captivate me.
Have any of you played it through and found it to be worthwhile?

After reading the other thread about “death of adventure games”, I am now convinced that the next game Ron should do is a story centric, dialog-centric, totally without puzzles, 3d, first person interactive novel. Seriously.

Yes, I remember that discussion. If Terrible Toybox did a Star Wars game, it would have become a blockbuster! Many people who never played a point & click adventure before would have been seriously attracted. But, a license for a Star Wars game might be too expensive anyway, even for a pixel-art point & click adventure game.
And, I understand Ron’s points of view in terms of creative independence and creating own IPs.

I am now convinced that the next game Ron should do is a story centric, dialog-centric, totally without puzzles, 3d, first person interactive novel. Seriously.