Which movies would make a great adventure game?

One scene in particular made me picture an adventure game in my head. Because it´s a classic timer based puzzle.

You should have a look at the ending of the video that you posted. I’m pretty sure that it’s not exactly the original one.

You should have a look at the ending of the video that you posted. I’m pretty sure that it’s not exactly the original one.

I did! But I couldn´t find short clips of that scene that had the original and where still not altered in some other way, and the other clips were too long. But it´s not different from the original the point is pretty much the same.

Here’s a controversial one. A point and click graphic adventure series based on Jonathan Creek or a similar character.

Here’s a controversial one. A point and click graphic adventure series based on Jonathan Creek or a similar character.

I was going to suggest Bill and Ted’s Excellent Adventure, given the time travel, historical characters and ending. But apparently it’s been done already. 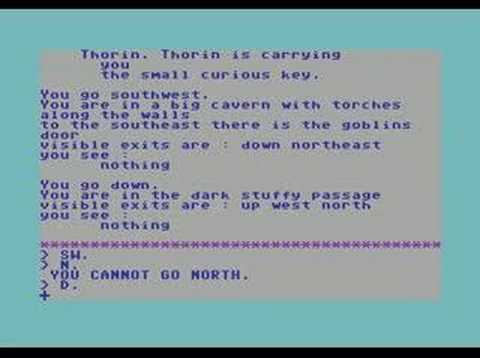 The Hobbit is an illustrated text adventure computer game released in 1982 for the ZX Spectrum home computer and based on the book The Hobbit, by J. R. R. Tolkien. It was developed at Beam Software by Philip Mitchell and Veronika Megler and published by Melbourne House. It was later converted to most home computers available at the time including the Commodore 64, BBC Micro and Oric computers. By arrangement with the book publishers, a copy of the book was included with each game sold. The parse...

I tried that one once, but somehow having read the book doesn´t seem to help in any way. I mean where was Gandalf when I needed him?!

Look to his coming at first light on the 5th day. At dawn, look to the East.

Hitchhiker’s Guide to the Galaxy

did somebody play the text adventure?

Hitchhiker’s Guide to the Galaxy

did somebody play the text adventure?

A graphic version would be good though.

I found an online version --> here

How about The Terminal? I can imagine solving puzzles to get some cash to buy food and clothes. Then, the whole burocratic aspect could be interesting with a bunch of lines of dialog (the agent that shuts him down on a daily basis, Stanley Tucci’s character, the cops, etc.).
The scene with the immigrant and the “goat” medication just has that adventure game vibe: you could either choose to save him when they ask you for the translation or screw him over instead.

Both very comedic, both has a plot suitable for puzzles.

And with both the devs can save on the soundtrack!

I like that idea. The first part could be going around looking for all the original band members, like in the film.

Yes. And Jack and Elwood in pixel art would look bodacious.

I can clearly see the game in front of my eyes

You know, that lint that tends to appear in your pants pockets over time.

But it should have driving stages.

Yes. You read into my mind. Like a game-in-game.