Which movies would make a great adventure game?

Continuing the discussion from What could be a new adventure game from Ron Gilbert?:

I would throw serious money at this. That movie captivated me when I was a kid and I would immediately play it if it was a PnC adventure game!

It has all the ingredients: funny kids! Pirates! Treasure hunt! Good villains! Superheroes!

This thought led me to the question: which other movies do you think would make a GREAT adventure game?

As I mentioned in the other thread: The Lost Boys
It sorta has a mood I think a PNC game could capture rather good.
Plus like the Goonies, its a cult classic.

Maybe too obvious, but I wish there were adventure games for the other Indiana Jones films. I was so excited when Lucasfan Games (the fan game maker who made MM Deluxe) announced they would do Raiders of the Lost Arc (which was then shut down by the copyright owners

The Goonies.
I remember that a videogame on C64 has been made already, but it was action, not adventure.

I remember that a videogame on C64 has been made already 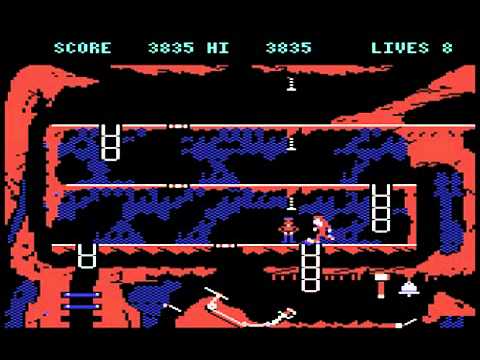 The Goonies by Datasoft - C64.COM

C64.COM is a C64 site dedicated to just about everything that is connected to the Commodore 64 (C64). Get your favourite games and demos here!

There is an “adventure card game” available:
http://www.albinodragon.com/product/the-goonies-adventure-card-game/

Movies not so much, but if I may also wish for PnC adventures based on TV shows:
Breaking Bad
Firefly
Hitchhiker’s Guide to the Galaxy
LEXX

I vaguely remember an adventure game based on the movie Hook. That was ok as I remember if a bit short.

I liked National Treasure: Book of Secrets and thought it could be a nice AG.

interesting question… movies with puzzles embedded in the plot… hmmm…
one obvious example are murder mysteries. but already done.

I think a movie like Inception would make an interesting adventure, with each dream layer a separate scene with its puzzles. (but rather linear, unless the plot is reworked a lot.) It would also allow puzzles with “game logic” or strange logic.

Also the movie Before I Go To Sleep would be interesting. the protagonist has lost short-term memory, like in Memento, so she has to take notes and pictures to remind herself who can be trusted and who can’t.

movies with puzzles embedded in the plot

If we want to focus on movies with “puzzles” embedded in the plot, I would say that any movie with a intriguing mystery to solve or a treasure to hunt would be a good candidate.

For example, Dan Brown’s “Angels & Demons” (both the novel and the movie) and the subsequent chapters of the series might be good clones of “Broken Sword”.

And what about The Hobbit?

I don’t recall if they solve puzzles (except maybe finding hidden entraces, jumping on the eagles…) but they could be easy to add. and would allow “fantasy logic”. (but basically we would have King’s quest…)

The last line of the trailer even tells you so

You mentioned Dan Brown, and I was thinking the Davinci Code. The book made each puzzle a challenge to solve, unlike the movie that seemed to just rush through everything and ruin the fun by making everything too obvious.

If you want to include TV shows, Lost could be a fun one. You’re stuck on an island, you have to find “the hatch”, and eventually deal with “the others”. Maybe some dialogue puzzles with the other survivors to prevent a mutiny.

I´ve been waiting for this thread.

There is one movie that immediatly comes to mind.

Besides it being a detective story, where the main character goes to different places to get information, he also does stuff that is classic adventure game stuff. One scene in particular made me picture an adventure game in my head. Because it´s a classic timer based puzzle.

During the dialogue scene with Jackie Treehorn, the phone rings he stands up and goes away for a short moment. You have to stand up “USE PENCIL WITH BLOCK OF PAPER” before he comes back and catches you and sit down again. In this particular scene the information turns out to be useless but imagine the possibilities!

Maybe I just want to see another murder mystery where I can play as the Dude and hang out in the bowling alley and interact with my friends Walter and Donnie (maybe make this game a prequel to include him).

I get that the point of this movie was that the story is the only interesting thing that happens in the Dude´s very unintersting life, but the whole detective thing is just ripe for a PnC. And imagine all the random dialogue like when you click on the wrong object the Dude goes;"Naawww, can´t do that man!"
Then you go to the Dude´s apartment: “LOOK AT RUG” “This is my rug, really ties the room together!”

I can clearly see the game in front of my eyes. Too bad the Coens (or Universal Pictures or whoever) probably wouldn´t care to give away a licence for a video game, but then again they did it for Fargo (for the TV Show) so…

Definitely, that’s the firts movie I tought about after reading the thread (it was also the first movie I’ve ever recorded in VHS

An amazing adventure, 80’s power, and the director is great too (Superman, Lethal weapon, Assassins)

and the director is great too (Superman, Lethal weapon, Assassins)

He also did the Omen, another film that is constructed like an adventure game (because it´s about the main character uncovering a mystery and there is very little action).