Did anyone see somthing similar?
My laptop runing WIN10 was way to full so I just decided to deinstall some stuff.
I went to apps to start deinstalling stuff from there. Found “A New Begining” but couldn´t deinstall it because I got a “Steam.exe not found” error.

I thought ok maybe I need to deinstall it from within Steam and proceeded deinstalling other stuff.
I found TWP in there too, everything was fine until then.

I started Steam after that to deinstall A New Begining but couldn´t find it in there. Hmmmkay ?
Not even in the not installed games… How did I get it? I still don´t know.

Anyways, then I recognized I just had three games installed in the library and TWP wasn´t with them.

Clicked on it in the games list and got the option to install it but not to play, just like it´s not installed.
Clicked on my desktop shortcut for TWP and got a popup if I want to install it…

I´m confused, I know I never deinstalled it and it still shows up in my apps in Win10.
Now I´m installing it again to see.

To be honest I did not start it for several month. Last time after I bought Ransom unbeeped, which I did not install until now. I stil want to play in the arcade at first which I still did not. I just hadn´t time to play any game at all on my pc for the last few month.

Besides of that, did anybody ever find a steam game no longer installed in steam but kind of still installed on the PC?

Ok download is ready and now it shows the Ransom DLC as installed too…
Game works as it should, with all savegames in there as well.

btw Of Topic: @RonGilbert Will you ever spend it some more saveslots? I guess not but It would be great to have more space there for different playthroughts.

Man I just activated the DLC for the first time now and now I have to start all over again, it´s awesome

I’ve had some issues with Steam uninstalling games that I “think” is related to the game trying to update and the update failing for some reason. Steam might just delete the game rather then deal with a bad update. That’s just my guess as what was happening.

on the getting more saveslots, you can try it in this way:

@ema it really is quite simple: the autosave slot is called Savegame1, the others are named Savegame2,… up to Savegame9 the savegame consists of the .save file and a .png for the thumbnail So copy/rename any manually saved game and its thumbnail to Savegame1 to put it back in the autosave slot Or vice versa copy the Savegame1.* files to another one to make a manual save in another slot Note that you can use the same technique to copy additional save-points in the game without being limited …

@ZakPhoenixMcKracken, this is not where the same games are stored on Steam. They are in AppData\Roaming\Terrible Toybox\Thimbleweed Park

So if you backup your savegames per playthrough or any other way you’d like to organise them - by act, by flashback /start/end/… in separate folders, it should be pretty simple to find back exactly what you want in even 10 years.

Thanks @RonGilbert and thanks @Sushi
That both was very helpful.

btw Of Topic: @RonGilbert Will you ever spend it some more saveslots? I guess not but It would be great to have more space there for different playthroughts.

I filled up all 99 saveslots in ScummVM while playing Zak McKracken and I don’t know why they limit it. (Okay, more while playing around with it after finishing the game; I only got up to 60 or so while actually playing.)

Oh well, in 2018 I’m quite happy with saveslots period, even if imo disk space should pretty much be the only limiting factor.

Here’s a video about it: 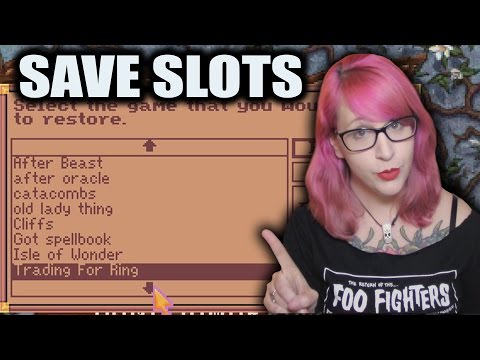 So if you backup your savegames per playthrough or any other way you’d like to organise them - by act, by flashback /start/end/… in separate folders, it should be pretty simple to find back exactly what you want in even 10 years.

Yeah, that works in most games. Perhaps easier/better in TWP than in most.

My previous ramblings about the topic:

Poll: Would Zak McKracken be better if it had "look" and "talk"? Adventure/Lucasfilm Games

I don’t think Zak has an absence of “look” per se. It felt like a half-way point between the “read” of MM and the “look” of MI/Indy4/whatever. The main problem with a lack of a talk verb is that you can’t easily get a repeat of what you need to do if you drop the game for a week or two. But this isn’t a problem with the lack of the talk verb per se. Various characters (like the shaman) spontaneously say things, just not necessarily all the pertinent things. In the talk implementation you’d hav…

Because in a book you can go back anywhere you want at any time. Videogames are the only medium in which that is sometimes made difficult for no apparent reason. Because you can create your own archive of the autosaves outside of the game. It just makes it more annoying.

That can range from a simple I’d like to see/do X again to a more involved choosing the other option.

Being able to start any levels/chapters once you finished it is a reasonable compromise but comparatively still pretty annoying.

Ideally you’d have the chapter thing (so you can ignore it) PLUS your own saves (i.e., bookmarks).

The mere, what was it, ~10? save slots in Thimbleweed Park were its biggest technical flaw imo. I (almost) never want to overwrite anything. I only want to add.

that’s only 8 save slots on that book

anyway, the original Zak had unlimited save games - at least one per disk. So if you bought enough floppies and labelled them…that’s why most of us replayed Zak over and over from the start. I remember having at most 2 or 3 save game disks/slots in use.

that’s only 8 save slots on that book

Eh, I’m not limited by anything obvious but indeed I might have to look for a different example than the one I happened to have at hand when I took that picture.