Name a thing! Name the game!

What about playing a little game?

No prizes this time, the game is just an excuse to remember together our beloved adventure games.

Here is how it works: I write the name of an object, place, animal or type of character/profession (e.g. a ghost, a pirate, an attorney) that I’m sure appears in at least one adventure game and you post a reply telling us two things:

If nobody gives an answer for a lot of time, anyone can ask for a hint and the current host has to provide it.

If the thread gets messy and more than one person provides a thing to guess at the same time, we just don’t care and try to answer to any of them.

I have two suggestions: 1) let’s not choose ultra-popular things that would be too easy to guess, like a monkey or a clown, and 2) let’s focus for now on point-and-click adventure games, we can extend the kind of games later if we want.

I’ll kickstart the game with…

Day of the Tentacle, inside the Mansion (in the past).

There is a digital dragon in the 3D virtual reality of “Sam & Max Hit the Road”.

Added: I’ll blur the description of the place, to avoid too many spoilers.

I think Maniac Mansion can’t be accepted, right? (Meteor… asteroid… is the same… or not?)

THE DIG!
(You can see it from the intro sequence)

here’s my next thing: EcoQuest is a series of two educational adventure games developed by Sierra On-Line. The original concept was developed by Sierra VP of Creative Development, Bill Davis. The authors of the series game design are Jane Jensen and Gano Haine, but Jane was not involved in creating the second game, having moved on to the Gabriel Knight series. The last of Sierra's various "Quest" series, EcoQuest is designed to teach about the importance of environmental ethics. The games are considerably easier than ...

(For the dolphin, I was thinking of Zak McKracken, when he falls in the ocean…)

There’s a pool table in “Virtue’s Last Reward”, but I’m not sure if it can be classified as a standard point’n’click adventure.

(For the dolphin, I was thinking of Zak McKracken, when he falls in the ocean…)

D’oh, right. (I really have to replay Zak :)) But EcoQuest has a Dolphin too.

There’s a pool table in “Virtue’s Last Reward”, but I’m not sure if it can be classified as a standard point’n’click adventure.

A few magazines found on Google consider “Virtue’s Last Reward” a point-and-click game, at least in part, so it seems a good answer to me!

It’s up to Zak to choose the next thing.

Virtue’s Last Reward is an adventure game where 9 persons are trapped inside a facility, and must solve puzzles to try to escape, but if they fail, they could be killed.
Anyway, the room with the pool table is this one: 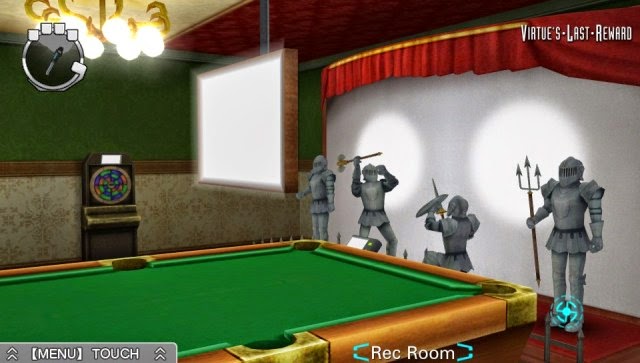 next thing: a real chicken (with no pulley in the middle)

At the very beginning, during the intro.

And now… a difficult one!

I remember that in “THE DIG” there was a toolbox named “the pig”, and for sure it wasn’t alive…

Actually I was thinking about a real dead pig from another game. But your answer is smart… I think that, if nobody has the solution in a reasonable time, the Ultimate Judge™ will decide if you’re tje winner

I think that it would make sense if the current host decides if the answer that he/she has received is acceptable.

I’m still thinking about the dead pig, though. I don’t remember a dead pig in any of the adventure games that I have played and I think that it’s probable that I haven’t played any game with a dead pig inside, but I might have found a loophole: I’m trying to remember some kind of ancient banquet in which there was a pig head as a dish, maybe with an apple in its mouth.

Actually I was thinking about a real dead pig from another game.

A Telltale game? The Wolf or Minecraft?

Ok, hint… it is a P’n’C adventure from the first decade of the new millennium, but its setting is in the past… and in which the protagonist is a detective.

At the very beginning, during the intro.

And now… a difficult one!

Is a boar close enough? If so, I have an answer…

EDIT: Just looked up “boar”, and it seems that it qualifies. With that in mind…

The roast boar from the kitchen at Castle Brunwald in Indiana Jones and the Last Crusade. (Obviously not the game from your hint.)

Next item: An advertisement for a phone company–but not a fictional phone company. (Sorry ZakPhoenixMcKracken)

Hmm… it’s a leaflet, or an Advertisement broadcasted by TV?

I remember a poster about a phone company advertisement but I can’t remember in which game I saw it.

Is a boar close enough? If so, I have an answer…

I’ll accept it so that the game will go on… but I’ll wait in giving the answer because maybe someone can guess.
Anyway your entry seems pretty difficult too!

There was a German adventure game called “Das Telekommmando”. It was meant as an advertisement by the German telephone company “Telekom” (still one of the biggest telephone companies in Germany and present in several other countries): 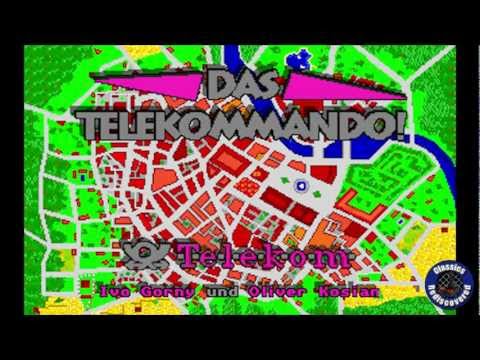 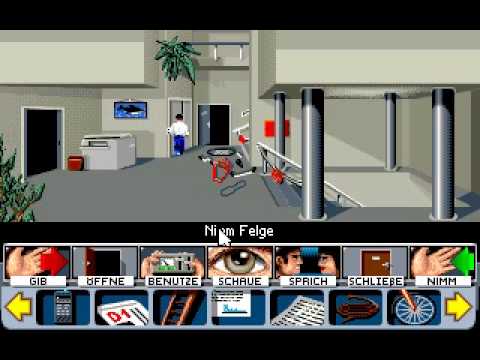 Were these a valid answer?