(SPOILERS) Which Easter-Eggs have you found?

You have been warned.

I’ve played the game a few times and every time I try to act in a different way or look for new things within the game. I’ve read in this forum about some Easter-Eggs and alternate endings, but I haven’t managed to find many, so I wanted to invite others to share their discoveries here.

I expect it’ll get very spoilery around here, so if you haven’t finished the game or wish to discover everything by yourself, then I strongly urge you to leave this topic immediately.

Out of consideration for the casual eye, I will blur my initial list here, but I don’t expect the rest of the thread should need it.

Note:. The list below will grow as others offer new discoveries.

What else is there? Have you found any other hidden or cool stuff? Please share below and I’ll add them to the list.

Good list! I would also propose for a list of randomly changing stuff (location of the coin, names of people to call to get out of the sewer, radio quiz questions etc.) since I´ve still yet to hear all the radio questions (and their correct anwers).

The sewer puzzle itself is an easter egg, you don´t have to do it if you don´t go into the alley.

Would you consider finding random stuff like the dinosaur skeleton in the sewers that could be missed on a playthrough an easter egg?

Oh yeah! The skeleton is an Easter-egg to me. Thanks!

There’s another Easter Egg,
round ‘n’ shiny Easter Egg!
I’ll just keep it in my head,
keep it deeply in my head.

I’ve updated the list above with the two extra ones mentioned by @milanfahrnholz.

There’s another Easter Egg,
round ‘n’ shiny Easter Egg!
I’ll just keep it in my head,
keep it deeply in my head.

Did you find any others that you could share? Let’s try to build a comprehensive list. I know I want to find more!

There is one I know of because I heard it Ron mention in an interview and I stumbled across one of them per sheer accident, maybe someone can help because I forgot.

There is a chain of phone book entries on which a couple of friends co operated. You call one number and each tells you to call another one, and this goes on through several entries(I neither know how many nor what the eventual punchline is).

Could someone tell me the name of the person who starts this chain?

I’ll add the backers’ items. I’ll also add the other ones you mentioned, since they are optional as well.

Seems this list will grow to encompass all easter-eggs and goodies for fans and backers.

By the way, I got the Betamax because I thought the MovieTron 3000&tm; puzzle was part of a larger chain. I wonder how many others did the same. If so, does it qualify as an easter-egg, or is it like just a part of a cut puzzle?

In the Mansion Mansion library, there are 13 books which title starts with “13:”.
On the second page of each book, there are 2 choices.
Every line is the title of one of the 13 books.
They are linked together to form a story with multiple endings.

They are all one alongside each other, section 1.6

Could someone tell me the name of the person who starts this chain?

By the way, I got the Betamax because I thought the MovieTron 3000&tm; puzzle was part of a larger chain. I wonder how many others did the same. If so, does it qualify as an easter-egg, or is it like just a part of a cut puzzle?

It was part of a puzzle chain which got removed. You could still get the tape because it’s another reference. So yes, it qualifies as Easter egg.

In the Mansion Mansion library, there are 13 books which title starts with “13:”.

They are still there in section 1.6 (bottom floor, left to the stairs).
Note that this section is quite cramped, you have to keep your cursor near the bottom of the shelf, see this screenshot:

The @thimbleweedpark mansion mansion library with object debugging turned on. #screenshotsaturday (It is Saturday? Right?) https://t.co/yEMIR05Drc 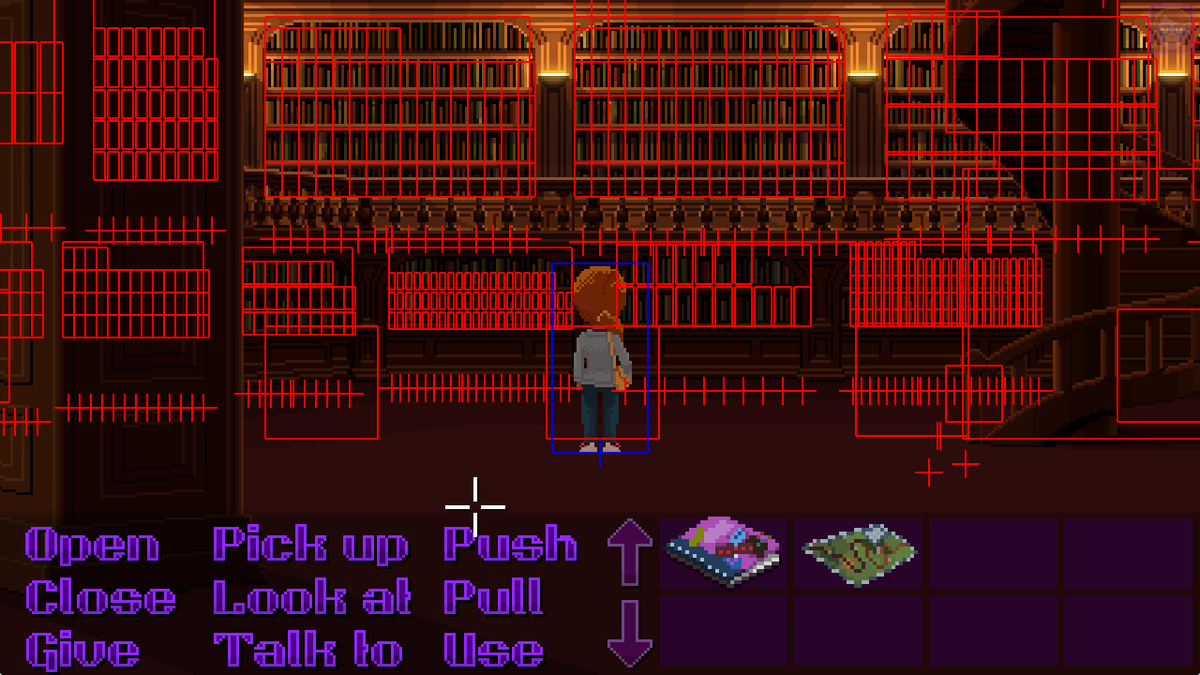 They are still there in section 1.6 (bottom floor, left to the stairs).

Thank you, I have found them.
Maybe I had moved the mouse on the half-upper area and couldn’t find them anymore!

Thank you, I think that whole thing can be added to the easter eggs list?

OK, I’ve updated the list on the first post with all the stuff mentioned so far. I added a section for “Backer Items” and “Other Backer Content.” In the latter we can add any other notable backer content, like books in the library or voice messages.

Thank you all for sharing!!!

I would add these:

I’m not sure if they qualify as easter eggs, but:

Freeing Willie from his jailcell is also optional and missable.

Right!
The first time I played TWP I didn’t succeed in freeing him, I know there is the possibility to free Willy (!), I’ll try to do it in my next playing.