Interesting: The United States are at the first place while Italy has only 3.3%. I wouldn’t have guessed/expected that.

Thimbleweed Park sales breakdown by country. Come on people, you can do better than Germany! Let's do this thing! https://t.co/ahqwBbJ7Mh 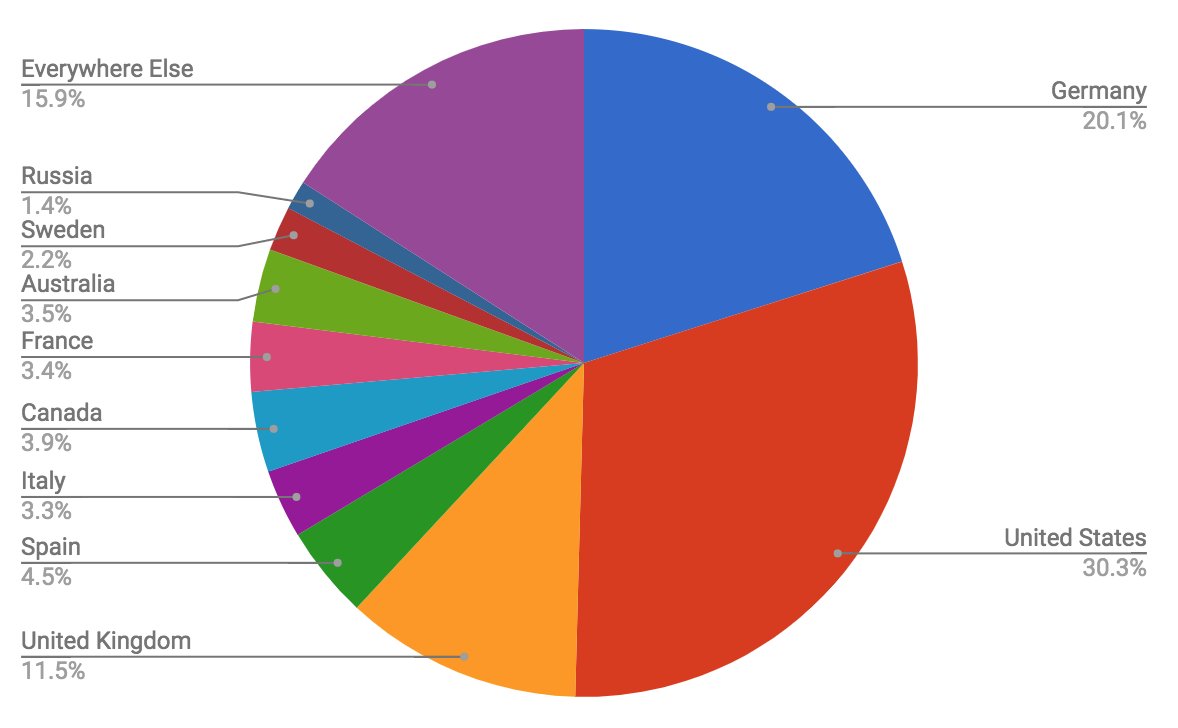 (In my next vacations I’ll travel to Everywhere Else. The people there seem to be huge adventure fans. Must be a nice place.)

Everywhere Else also includes some sales where we don’t know the country. That number isn’t significant, but it’s a few %.

That has been my favourite place to live for a few years now!

Italy has only 3.3%. I wouldn’t have guessed/expected that

That has been my favourite place to live for a few years now!

joys and sorrows of escapism

It’s a pity indeed. Maybe it’s because the voices are in English only, seeing that the texts were actually translated to Italian, French, Spanish and Russian.

It would be interesting to see such a sales breakdown for other point & click games from the recent years for comparison.

Personally I can´t fathom how anyone can buy anything that has Ronaldo´s face on it, but what do I know…

German and UK will get an even bigger slice of the pie chart when I’ll calculate the per-capita values, which will tell something about where the adventure game culture is more prominent.

Ron should move to Europe for a while and enjoy the large audience of his live coding session tours in theaters.

Here is a chart of the relative quantity of money that each citizen of a country has given to Terrible Toybox, Inc. to buy Thimbleweed Park:

…which also suggests how much a citizen of each country is willing to spend.

(Yes, I’m aware that these calculations and conclusions are too rough to be reliable, but let’s consider it just a game)

Are these just per-capita adjustments?

Yes. These numbers don’t take under consideration a lot of other things that must be calculated to get less misleading conclusions.

Yes. These numbers don’t take under consideration a lot of other things that must be calculated to get less misleading conclusions.

Chaos theory is what you get when you do math with a Twitter screenshot.

I’ve heard Italians will now have much more time to play TWP in 2018!

I’ve heard Italians will now have much more time to play TWP in 2018!

So you ARE swedish!

(it’s about the same anyway)

You know like they say that history is only written by the winners? Well, appearantly not when you´re not into football.

This makes me question so many things…

Btw. coincidentally it matches quite well with the backers of the original Kickstarter:
https://www.kickstarter.com/projects/thimbleweedpark/thimbleweed-park-a-new-classic-point-and-click-adv/community