Was about to post this as a Twitter thread, but I could use some more characters and formatting!

First of all, thanks for sharing Ron and David! It’s great be able to to play with this codebase 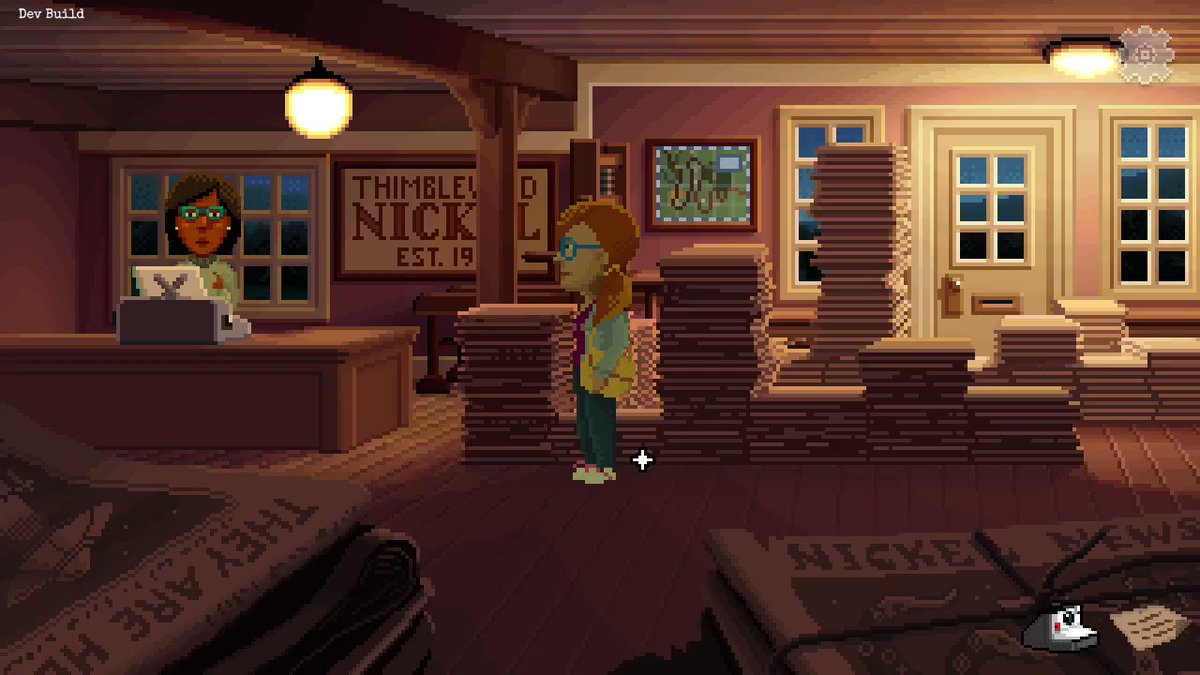 Sooo! The first thing that struck me was that the conversation scripts (Yacks) are written in - I THINK - Ink.

If it’s not Ink it’s indeed something very similar and I apologize in advance if:

I created a dialog choice to test out the system, so let’s dive into my edited version of Natalie.yack:

You can probably think of “diverts” -> as "GOTO"s. They “divert” the flow towards this or that knot.

parrot OFF|ON seems to me that it is interpreted by the engine as a command to turn off and on the repeating of the dialogue choice text by the active playable Actor.
I switched it off when I wanted to have Delores say a different thing than the one that was displayed as a choice. This is Adventure Game Comedy 101, here!

{ actorTurnTo(delores, DIR_FRONT) } between curly brackets you can call actual methods and this one pretty straightforwardly “directs” the Actor delores so that she turns towards the camera.

NOTE: I’m aware that what I shared doesn’t make Delores look back again towards Natalie after that, but that’s just me testing!

Now on to the dilly-dallying! I enabled Delores to dilly-dally by the newspapers in the Nickel, also making Natalie aware of that, saying a random line out of a simple list of lines.

First, I have included the “verb_dillydally” as instructed in the VerbHelpers.dinky file.

I did not include it in the verb_no_walkto list, because I wanted Delores to walk to the hotspot.

Then, I moved on to the room script, Nickel.dinky. In the script you can see a function assignHeadline(obj, headline) that handles the code for every newspaper Object that’s in that room.

Since I wanted Delores to dilly-dally by all of those newspapers, I simply added this block of code to the function.

Of course randomfrom() simply picks a random line among those I defined in its parameters.

If I wanted, I could modify each newspaper Object more or less like this:

Newspaper.genericNewspaper(strupper(note)) will open up the Newspaper UI, showing the content of note all in uppercase.

You can see that I put those breakwhiletalking() calls between the lines. That’s because otherwise I wouldn’t have been able to read the previous line before it skipped to the next.

I’m not entirely sure about this, but it seems to me that SAY() is a “breaking” action while sayLine() is not. So sayLine() is more for the so-called “barks”. If you are familiar with Adventure Game Studio scripting, this, to me, sounds much like the difference between Say() and SayBackground().

Hope this makes sense to anyone who reads it

It’s great be able to to play with this codebase

And it’s great to see the experiments that result from it!

SAY() is just a macro that embeds the translation information. You can see it in Defines.dinky. sayLine() is the actual command. SAY() and TEXT() do the same thing, we have two just so the text extractor knows which one.

will have delores just say “There”

Inside .yack files, the

And yes, .yack files are based on Ink, but high simplified. I call === dest ==== labels, but you can call them whatever you like.

Inside .yack files, the

Ooh, I see! Thanks for clarifying.

I only looked around so much and it seemed that very rarely (if ever) two characters speak to each other outside of conversations, so that’s why I made the wrong assumption!

Making sayLine() wait outside of .yack files would be odd. Most of them are said “in real time” as the play runs around. There would be a lot of blocking.