Ron is asking to support this project… 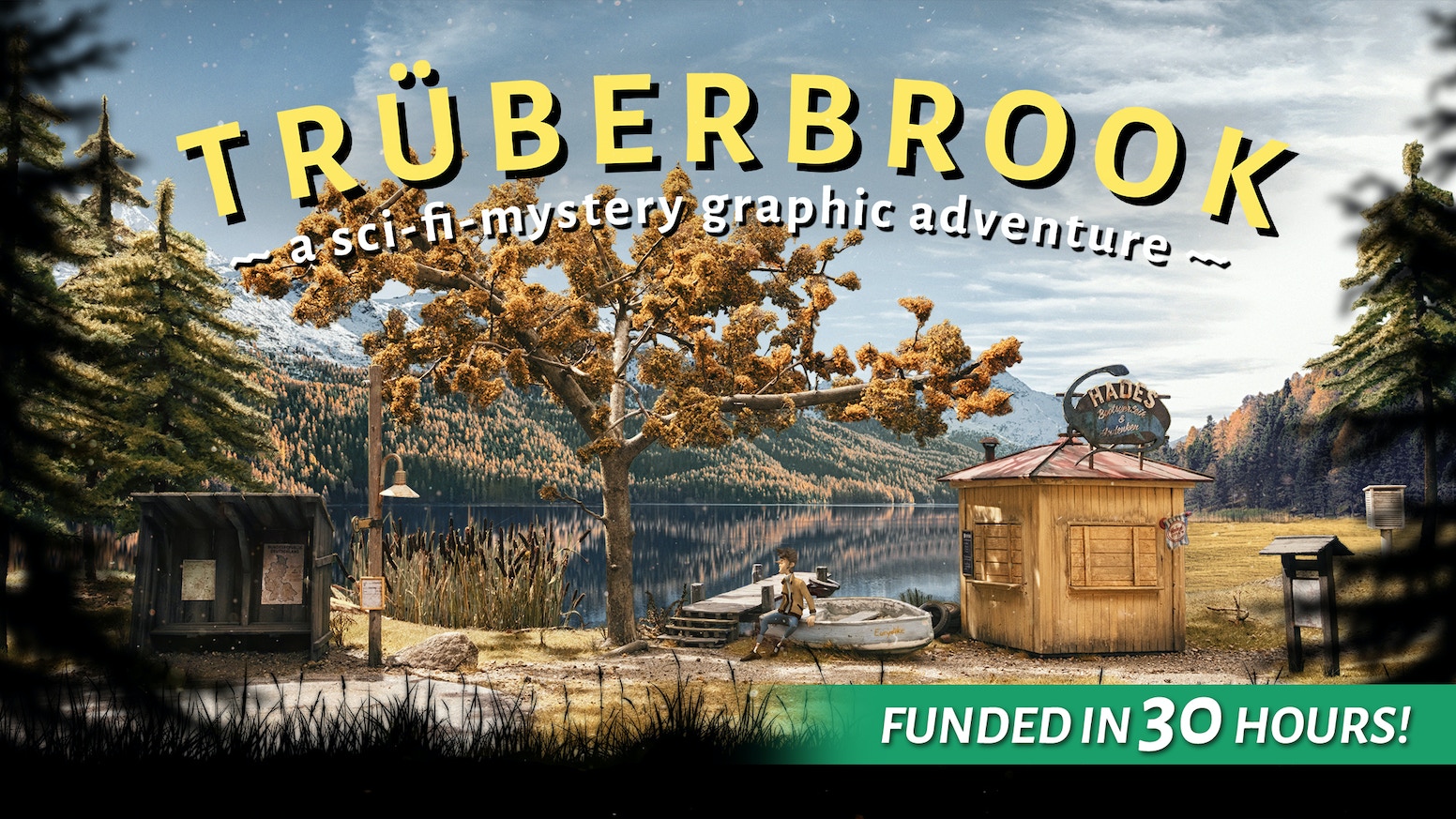 TRÜBERBROOK – A Nerd Saves the World

Enjoy an adventurous vacation to a 1960's parallel universe! A Sci-Fi-Mystery Adventure Game with handmade scenery.

Its looking pretty good, just wondering what is the budget for such a complicated process (i am sure the goal is not the budget)… anyway, it looks great!
The interesting and tricky part is the photometry to the 3D scene, instead of doing everything in 3D since beginning. Its like do the job twice

But if they wanna keep it as stop-motion as realistic as possible…it work.

It looks like they already succeeded their campaign a few days after start.

Wow! That looks good! I’m not too thrilled about the story (or at least what they describe in the promotion video); it seems a bit chaotic. However, the production process intrigues me.

I just backed the project. I can’t wait to learn more about it.

Thanks for posting this!

We had a short discussion about that game over here:

I have started to follow the development of a new promising adventure game. It is developed creating physical miniatures of scenes and objects, that are eventually captured with a 3D scanner. I really like its photography and the references to “Twin Peaks” and “The X-Files” (does that remind you of anything?). Trüberbrook [image] [image] [image] Description Gameplaywise, »Trüberbrook« is a somewhat classic point-and-click adventure game with a modern approach. Mood and atmosphere of th…

just wondering what is the budget for such a complicated process

They answer that (partially) in the “Risks & Challenges” section of the Kickstarter page:

“Thanks to a funding by the Medienboard Berlin-Brandenburg and our own crossfinancing through other projects, we were able to already finish a huge part of the game.”

The developer is a German TV studio that produces several popular German TV shows. So they have/had some money.

/edit: You will find more information about the “Medienboard Berlin-Brandenburg” on Wikipedia.

Thanks for the details. I’m very excited!

The Kickstarter is now live:

I’m replying here, since this is a more specific thread about the game.

Thanks for the heads up. I was a bit busy in the last week so I didn’t have much time to read carefully the Kickstarter page, now I have and I backed the project. Unfortunately, I lost the early-bird rewards, but that’s OK.

Trüberbrook belongs exactly to the kind of adventure games that I want to support: I liked the art style since I saw the first screenshots and videos, I’m happy that they decided to do a kickstarter.

I’m not really a fan of the “save the world” plots, because they feel to me a bit clique, but the other unique and original features of the game fully compensate for it, at least for me.

Backing the project is also a good example of how much the visual style of a game can influence my decisions. I can’t help to remember that even Thimbleweed Park wasn’t an instant-back for me, and that makes me think that a non-popular developer really needs to show something that is not just an idea or vague concept in order to motivate people to support the project.

I hope that they will reach they stretch goals. I would very interested in the making off (I loved the Broken Age documentary).

(EDIT: I’m also changing the category of this post, since the thread is about an adventure game.)

There are still four days to back.

I was a day one backer on Trüberbrook since it is an adventure game and the art style and craftsmanship had me intrigued. Also the setting of Germany in the 60’s (with a twist) sound interesting.

The developer has just announced they can offer the game to backers on PS4 and the controls they have shown do look interesting. Had planned to get it on Mac but am now considering the PS4 version.

Does any of you have experience with adventure games (point and click) on consoles? I have always played p’n’c on computers.

Does any of you have experience with adventure games (point and click) on consoles?

The campaign is still running for ~3.5 days. Enough time to buy TWP on PS4 and try how it works

Trüberbrook use a different approach as TWP. According to the videos, you control the main character in Trüberbrook with your controller similar to the hero in a jump-and-run-game.

Have to rely on you guys´ experience.

Then it’s time to replay TWP on a console of your choice!

Trüberbrook use a different approach as TWP.

Your version of TWP maybe.

According to the videos, you control the main character in Trüberbrook with your controller similar to the hero in a jump-and-run-game.

Yup, I thought that was interesting too. And it looks like you control the character with one thumb stick and use the other stick to move a pointer around (or where your character is looking, if you will). This setup does look very interesting but I am also wondering if it changes the feel of the game a bit.

I am actually considering staying with the computer version. Down the line my PS4 will be replaced and therefor put away but at Steam key wil probably stay active a bit longer.

So, Trüberbrook now have a homepage. Funny how the top of the page is very similar to the Thimbleweed Park homepage with layers scrolling when you start scrolling down the page.

Funny how the top of the page is very similar to the Thimbleweed Park homepage with layers scrolling when you start scrolling down the page.

It’s just another “Bootstrap” homepage. The design with the layers is also common today. So nothing special.

The Steam page is online:

It doesn’t come up unless you search with the umlaut. Interesting. I know that’s technically right but wonder if that will stop some people finding it.

unless you search with the umlaut

We have that on our keyboards. How do you use that when you need it?

On my phone I hold down the ‘u’ and it brings up options. On my desktop I press Alt-u I think.

How do you use that when you need it?

I obviously memorized all the alt-codes. Ä Ö Ü ö ä ü. I’d have also memorized ß, but I live in Switzerland.

Funny thing is, I can’t remember them if I have to write them singularly as I did now. But if I’m writing German, my fingers move by themselves.