There are collector and non collector editions for consoles but only Collector for PC I believe. Even preorders will be open soon the shipping is months away. I will buy PC collector I guess. It comes with all of these:

Currently following other adventure games can be pre-ordered there: 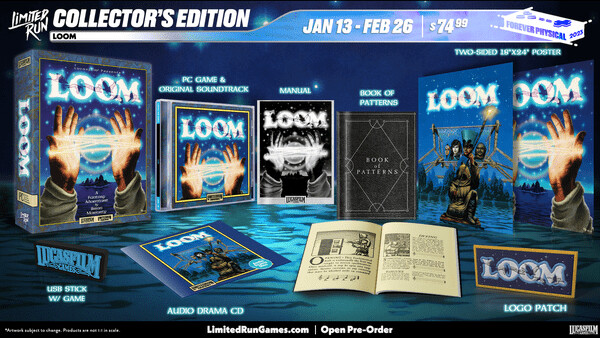 As for the MI6 CE. Too much stuff that I do not particularly care about. Not quite sure if the soundtrack on CD is worth $90 + shipping. If it’s even on a separate Audio CD … it just says Original Soundtrack + PC Game, so might as well be a DVD-ROM with some MP3s on it. Really on the fence about that one …

only Collector for PC I believe

What a cheap trick to try and make you buy it 4 times at $90+ 1 time for the anthology “upgrade” at $60. That’s $420 without shipping to collect all keys to unlock the secret.
Wait - that is just an expensive trick.

Wait - that is just an expensive trick.

The price is why I won’t buy the physical copy this time. I’ve backed the big(gest) Thimbleweed Park box and I own all Monkey Island boxes. But this time … I don’t know. IMHO 90 USD are too much for a game that’s “just another Monkey Island” game. (I’m still playing it, so maybe I will change my mind

I own most of the stuff in this Collector’s Edition.

So I won’t buy it for 100 USD (plus shipping)! Similar is valid for the Loom box.

IMHO 90 USD are too much

My thoughts more or less, though I am also pretty sure if this was a Kickstarter reward tier, I’d be all like 'shut up and take my money!". Maybe the prospect of having something nice in the future is more enticing than having a questionable collectible of something that already exists.

Though to be fair, the Collector’s Edition of Baldur’s Gate 3 is $250 + shipping, and it’s also just full of junk that’ll catch dust on a shelf. So $90 in comparison isn’t that bad.

Long story short, I guess for me the box is the collectible (and I like a physical copy of the soundtrack, too), but I’m no fan of statues, pins, trinkets, certificates and what have you. That certainly limits the price I could justify paying. I’ll rather spend those $90 on another LEGO set. Which will also collect dust on a shelf …

though I am also pretty sure if this was a Kickstarter reward tier, I’d be all like 'shut up and take my money!".

I’m not sure if I would have done the same.

I backed the TWP box, but not everything. But it depends on the project: I’ve backed the highest reward tiers when some of the rewards were very interesting in my opinion.

If there would be a Monkey Island box with the essential stuff (like a manual and the soundtrack) for, let’s say, 50 USD, I would buy it.

I’ll rather spend those $90 on another LEGO set. Which will also collect dust on a shelf …

In contrast to the MI box you could re-brick the LEGO set.

I don’t know why, but I am rather conflicted.

Buying the TWP box (after the Kickstarter) was a no-brainer, but the aura surrounding this new product seems a bit underwhelming and I’m not sure I want it.

A friend of mine told me that I had buy it because it is the MI game that provided the infamous answer about the “original secret,” but while I enjoyed the game I don’t feel as invested in the merchandise as I was for TWP.

The diner’s tablemat and the page of Nickel News contributed to make me feel inside that world. A MI pin and a golden key don’t carry for me the same magic.

I’ll give it some more thought…

A friend of mine told me that I had buy it because it is the MI game that provided the infamous answer about the “original secret,”

Tell em you already have the MI2 box

A friend of mine told me that I had buy it

Is his name Ron?

Tell em you already have the MI2 box

You know, you made me think that this one would be my first boxed MI game. I’ve never been a collector of anything, in the past.

The publishing of a physical copy of RtMI could be an occasion to get the whole lot: the “30th Anniversary Anthology” box and the RtMI game, but the anniversary box is sold out.

Is his name Ron?

I know this person since we were teenagers, so I double checked and his name is John.

I won’t pay any price either. Not even for the best game of all time.
Not sure, but isn’t it twice as much as the TWP standard box at Fangamer a few years ago?
Unfortunately, this could turn out to be the only opportunity to get a physical copy of RtMI, apart from second hand. You never know before. So, I am conflicted as well.

It would have been a shame if the Anthology edition was outdated/incomplete so quickly, so I’m glad there is an upgrade kit.
Sadly it doesn’t seem to include the soundtrack. IMHO 90 USD are too much

I agree. But just buy 2 copies, and put one on the bay as soon as it runs out of stock.

and put one on the bay as soon as it runs out of stock.

Now you put an idea into my head…

But just buy 2 copies, and put one on the bay as soon as it runs out of stock.

Never sold anything there, so no idea how much effort is involved, but somehow I imagine that this would make the one copy even more expensive, given how much I value my free time

I like the idea, but I agree with Kaiman, since the acquisition cost is pretty high. If you want to sell it even at a higher price in order to make enough profit, you might have to be very patient. Also, you won’t be the only offerer on ebay.