So, until now I skipped all the other mini consoles that came out so far. Wasn´t that easy sometimes.
The C64 Max was really hard to skip, but I did. Even that one.

But with the upcoming The A500 Mini I´m finaly lost. I preordered it a few days ago and can´t wait for April the 8th to get it.

So why? I don´t know exactly. But I think because of the awesome look, the really cool USB tank mouse and the controller too. And that it is so easy and already built in, to add your own games to it.
It´s just a super easy to use machine.

Together with my Competition Pro USB Joystick, I´m sure I will love it.
The first thing I will add, is all the Amiga Lucasfilm Adventure Games.

I think that will be the machine I´ll use to finaly show my daughter the games that I loved as a kid and still do. I wanted her to be good enough at reading to enjoy them herself. And I think slowly we are at that point.

I watched every Youtube video out there that reviews it and oh boy, I can´t wait to unbox it. It´s a little bit like waiting for Christmas. And I´m way to old for this kind of anticipation, but I like it.

I think I shouldn´t in these times, but I can´t help it. 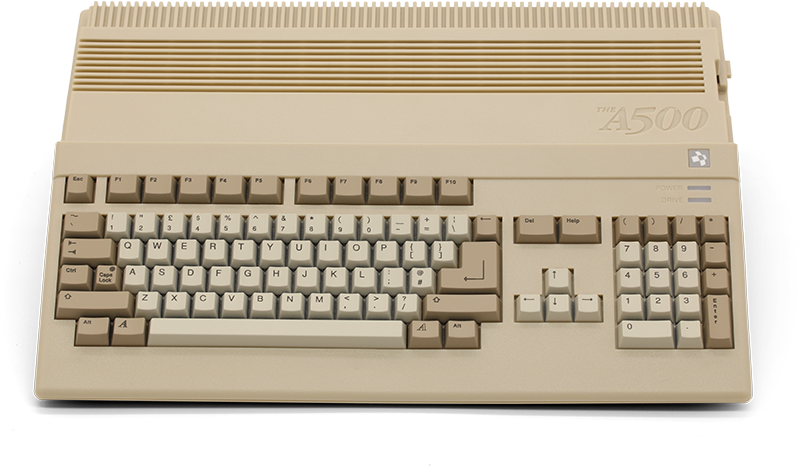 That’s unfair. With this model, everyone can press CTRL-Amiga-Amiga with one hand.
Back then, I was the only one able to reset my Amiga with only one hand

Not really, that´s not a working keyboard

I can´t wait to unbox it.

I’m still uncertain if I should buy it.

Back then, I was the only one able to reset my Amiga with only one hand

We need pictures as a proof!

You can connect a USB Keyboard, but it has an onscreen keyboard. That should be enough for most cases.

I´ve seen Workbench 1.3 running on it and Deluxe Paint too.^^

Sure I´ll report as soon as I get it.

We need pictures as a proof!

Pretend it is an Amiga Keyboard:

As much as I love the Amiga (and with my own probably no longer in working order - I don’t dare try), I’m still going to skip that one.

I mean in a way it’s just an emulator in a fancy case, so it can’t do anything I couldn’t do on my PC. On the contrary, on the PC I can boot an image of my real Amiga hard drive, while this one is probably limited to running individual programs from disk images.

Really the selection of games is probably what keeps me from liking it more. If it had more of my favorites out of the box, nostalgia might have won me over.

I was thinking about waiting to see if they do a The A500 Maxi like they did with the C64. But then I thought, ok this thing will be huge… too huge.

Since I can make things like hooking up original Amiga images with Pimiga but I don´t do it, the mini will be everything I need to just have the nostalgia of playing my old games, using the tank mouse with something that looks like the Amiga but more cute. ^^

With Pimiga comes so much stuff you can do. Still emulated but really good and way faster than it would be possible withy any Amiga regardless if it has a bosster like the Vampire.
From the description: 1360 MIPS, 1.3 million dhrystones and over 355 Mflops! 2479 times faster than an Amiga 600.
But all I do when I load it up is playing some old games or start some demos here and there.
It is a 40 or 50gb image if you load the full one, so you can imagine in terms of Amiga this is a lot that comes with it. I don´t need all of that. And I never had something like Amiga OS 3.1 / Workbench 3.1

Chriss Edwards did an awesome job with it: 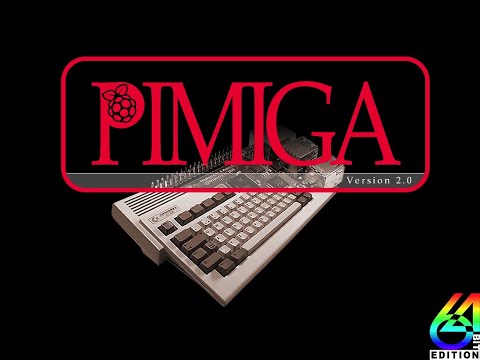 But still that´s just way more than I need 99% of the time.
As said before of course you can emulate on PC, Recalbox or Retropie, even on Handheld Consoles.
But I decided for me the Mini will be exactly what I want. Easy adding Games, easy to use while providing a decent amount of nostalgia through the hardware. And all of that while not taking too much space in my living room.

In the end you are right it´s just a case with an Amiga emulator.
But did I already say I can´t wait for it?

In the end you are right it´s just a case with an Amiga emulator.
But did I already say I can´t wait for it?

It’s been years since i’m using WinUAE as “the” Amiga Emulator. Every game works fine!

I mean in a way it’s just an emulator in a fancy case, so it can’t do anything I couldn’t do on my PC. On the contrary, on the PC I can boot an image of my real Amiga hard drive, while this one is probably limited to running individual programs from disk images.

But WinUAE is a configuration nightmare…

It’s really powerful but you have to dig through the countless options until your game/app/Workbench starts properly.

So I do understand why @tlammert likes the A500 Mini. You just have to connect the little box to your TV and you are ready to play the games you like straight from your couch.

But WinUAE is a configuration nightmare…

It’s really powerful but you have to dig through the countless options until your game/app/Workbench starts properly.

That’s true, at the beginning. Once you get your optimal settings, that’s done.
It’s part of the “game” itself.

On The A500 Mini, you still have Advanced settings, since the variety of games using different hardware is huge. In single cases it could still be neccessary and usefull to have these options. These are saved per game too.

In this timestamp it is showcased for the game It came from the desert: 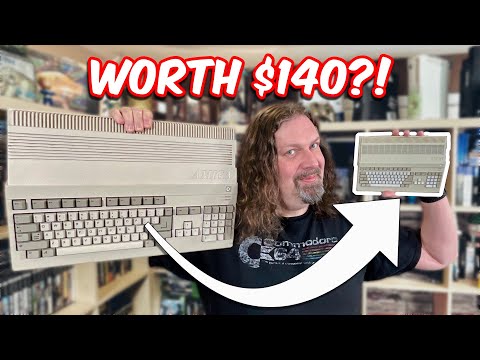 You can remap the Gamepad and Joystick (not included) too:

8 MB of RAM… EIGHT Megabytes of RAM… how much did it cost back then?
I was lucky enough, my dad had purchased one expansion module, and I felt rich!

And yet, it’s still enough to run marvellous and original games.

Yeah, the mouse is fantastic too! Just not worth 130€

8 MB of RAM… EIGHT Megabytes of RAM… how much did it cost back then?

Back then I got a 2 MB expansion, but no idea how much that was either. With that you could play Settler multiplayer matches on map size 5, which was awesome!

My friends had the usual upgrade to 1 mb in their A500. I was in the lucky position to have an wealthy uncle who gifted his old Amigas to me. At first his Amiga 1000 to my Father and later his Amiga 2000 to me with 2mb expansion. With two build in floppy drives + an external one. And a never used 5 1/4 floppy drive build in. It was huge but awesome.

BTW, you can buy the controller and the mouse separately. They are already listed at Amazon.

I just found an interesting video from Chriss Edwards, the maker of Pimiga.

About the possibility to buy a brand new “Amiga” in 2022. 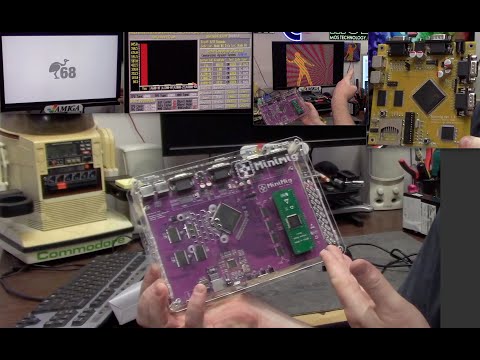 Edit: You can even use Pistorm with it and probably a Vampire Card too.

EIGHT Megabytes of RAM… how much did it cost back then?

The new 4 MB ram were 75 DM each. Direkt conversion would be about 38€. If you take the inflation into account it would be about 70€ today according to the internet.

And more related to the topic, there is a Video of Retro Recipies, were he got a kit to mod the C64 mini to have a real keyboard using a custom PCB, switches, some diodes and an Arduino. 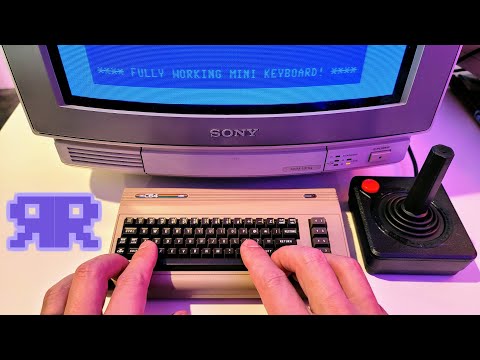 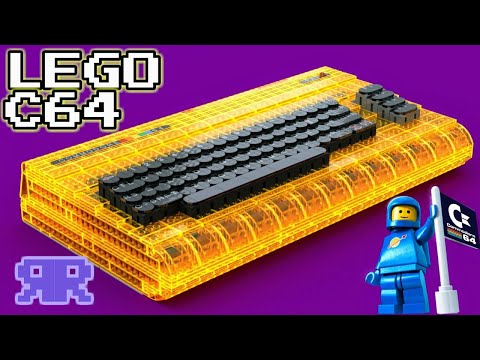 Anybody saw Perifractics fully functional Lego C64 housing? There are some Youtube Videos about it on his channel and it´s on Lego Ideas now also. He build a Lego keyboard for it with keys that can be pressed and you can fit your C64 internals into it also. In that case you can use it with your original C64 Keyboard or even replace the Keycaps on that with Lego Bricks. Awesome and hilarious at the same time

Oh and did I mention I can´t wait to get the Mini?