Cuphead: platform game in the style of old Fleischer cartoons

Max Fleischer was the cartoonist who created the character Betty Boop and the first cartoon versions of Popeye and Superman.

To give you an example of the style of the cartoons he created in the 30’s, have a quick look at the following one:

… and now have a look at the gorgeous platform game Cuphead, soon to be released!

All the graphics have been drawn and animated on paper, just like the old cartoons.

I don’t know how good the game will be, but isn’t the art style simply astounding?

This thing could be the first platform game that I will play after decades of other stuff.

3 Likes
Under development adventure games that are worth a mention
Nor_Treblig September 4, 2017, 9:01pm #2

Yes I do and I’m glad it comes to GOG!
Release date is currently 2017-09-29 for a lot of platforms and it will support coop, nice!

What input device do you need to play something like this? Do joysticks still exist?

Yes they do, they just got a lot smaller (as phones did) and they now put two joysticks on one board and call it “game controller”:

Game pads and controllers are great input devices especially for platformers.
Personally I use XBox controllers (I have 360 and One, the latter has a better D-pad and you can use the same controller wired and wireless) and I also use a retro (SNES-like) USB gamepads from Buffalo (amazon.com):

(Most platformers on PC platforms of course also work with keyboard input, but e.g. I wouldn’t want to trash my tablet/laptop keyboard while playing games; controllers are easily replaceable and work better for this task).

Thanks for the update. Well, they seem overcomplicated but at least they have become less phallic than the ones I used to know.

A lot less than it seems at first

they have become less phallic than the ones I used to know.

they have become less phallic

I still have my Microsoft SideWinder 3D Pro:

I first played Maniac Mansion and Zak McKracken with this thing:

Luckily, I can’t find a photo of the first one that I used, an analog one.
I say “luckily” because it was an awful joystick.

But then I used this one (an “Albatros”, it was made in Italy) on the Amiga and it had micro-switches:

I first played Maniac Mansion and Zak McKracken with this thing:

I also used this joystick:

…and my very first one, still functioning (it didn’t use micro-switches):

I don’t remember exactly the first controller I used, it was probably a Quickshot (or a clone) with two buttons, one like these:

But the one I enjoyed the most using was the TAC 2: Totally Accurate Control!

You can still buy the Competition Pro Joystick. The USB variant is available from Speedlink via Amazon and other online shops, just search on Google for “Competition Pro USB”. Here is a link to the German Amazon: 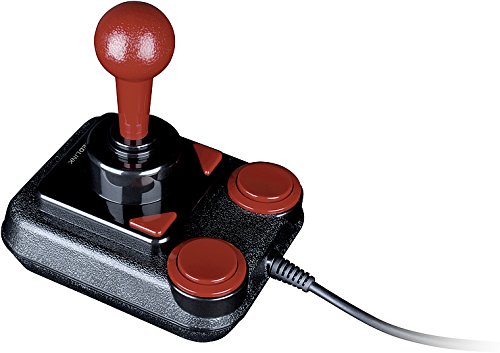 In addition Individual Computers still sells the C64/Amiga/ST/… variant of the Competition Pro:

Please note, that these joysticks are new, not “old stock”.

Yes Someone, the Speedlink Comp Pro look even better, if possible!
(Sorry Low, we’ve turned this topic into one about devices…:-P)

Sorry Low, we’ve turned this topic into one about devices

He started it when he asked about joysticks!

Sorry Low, we’ve turned this topic into one about devices…

That’s OK. I have to decide which device to buy anyway, if I want to play Cuphead.

To me it seems that almost all joysticks need a rigid surface to be put on, while controllers are better for couch playing.

I think that I will play the platform on the couch, so I will probably buy a wireless controller. The only thing that might be an issue is that I’m not familiar with the analog joysticks and I don’t know how much I will suck at using them. I already know that I suck at using them in 3D games but a 2D platform is different.

So, to be safe, I would prefer to buy a controller with both an analog joystick and the d-pad.

To me it seems that almost all joysticks need a rigid surface to be put on, while controllers are better for couch playing.

I believe the Atari 2600 Joystick (which btw is obviously Ron Gilbert´s favourite Joystick of all time) is one of the few that are supposed to be held in one hand. Because it was meant to be played on the couch or in front of the TV. Most computer joysticks had suction cubs an I rememer how annoying that was.

I honestly don´t know any kind of gamepad that has fully retired th d-pad, both should still be the standard.

It should have less than 11 keys, because I have only 10 fingers

Don´t expect even 10 of those to be in use, especially in a platform game. Often you´re good to go with 6-8.

What you really need is some intuition, but that is learnable.

I remember showing my dad how to run AND jump at the same time in Super Mario Bros.

So you jump pressing the A Button and you run holding the B Button while simultanously pushing the d-pad in the direction you want to run to(left or right). In order to run AND Jump you obviously have to push both buttons AND the d-pad at the same time.

“How is that even possible?” my Dad asked, puzzled.

Was that comprehendable? It´s not easy to explain when you´ve grown up with this so things like that are part of your DNA. I couldn´t tell how intuitive it is, but I´m pretty sure I figured that out myself as a kid. I even practice that same method in games like Mega Man, that don´t even have a running function, when I want to traverse bigger gaps. It just feels natural holding the controlpad like that now. It makes me feel more secure.

But I think you can learn things like that at any time. It is really not that hard, and while the big number of buttons and analogue sticks on todays gamepads seems overwhelming at first, it really isn´t that bad when you figure out what you actually need.

D-pads-only (or joysticks which act like that) are OK for retro games but for modern games you should (also) have a controller which includes analogue sticks.
Most modern games are are made with this in mind and allow a more fine-grained control over movement etc…

A proper D-pad (XBox 360 bad, XBox One good!) is especially important for retro games where one wrong move kills you (especially true for grid-based movement like Bomberman or Tetris).

I can’t say much about Cupheads gameplay yet but it actually may work well with D-pads only.
Generally if a game works well with keyboard input then you can always use simple gamepads and just bind buttons to keys even if the game doesn’t support such input devices.

If you use Windows I definitely recommend XBox One controllers, they work really well for most games (if a game just supports one specific controller then it’s likely an XBox controller).
For games with simpler controls I use and recommend those SNES-style ones mentioned above.