I really think the best way to learn the grammar of another language is to forget about your own and learn from scratch. You can almost never just translate something you would say in your language and expect it to make sense in another. At least that is how I do it. Watch, listen and learn.

Absolutely. When I speak English, I should enter in a “mental state” different from what I’m used to. I should not translate from Italian.

Absolutely. When I speak English, I should enter in a “mental state” different from what I’m used to. I should not translate from Italian.

I don’t think that’s something you can force for the most part. It’s just something that happens automatically once you reach a certain level of proficiency.

I do think you can shortcut it somewhat, for example by using dictionaries in your target language as quickly as possible rather than those that go from one language to another. But that’s basically just an extension of listening and reading plenty. It’s more of a “cheat” for reading and thinking more in that language, connecting words with each other etc.

using dictionaries in your target language as quickly as possible rather than those that go from one language to another.

Can gente have a plural if there are several distinct subgroups?

Actually, yes. “Le genti” indicates that there’s some distinctiveness in the groups. If you say, like, “northern people” like “la gente del nord” you’re referring to all northeners together, but if you say “le genti del nord” it sounds more like “northern populations”.

Anyway, this “gente / people” gave my friends problems in German, because “die Leute” is always plural.

Is it true that after “I would like” or “I like” the verb must be in the -ing form instead of the infinity one?

Not unless you have any specific examples in mind, anyway.

Which one is right?

Which one is right?

As @milanfahrnholz said, both. But for Brits there might be a slight difference in meaning.

Interestingly, “I enjoy to play TWP” isn’t a possible sentence.

“What do you do in your free time?”
“I like playing / I like to play Thimbleweed Park.”

As a statement on its own, the first one does convey the meaning “I enjoy the game”, and not only “I enjoy doing this activity”.

Interestingly, “I enjoy to play TWP” isn’t a possible sentence.

Yep, instead you would say “I enjoy playing TWP”.

After reading this post from @tasse-tee, I wonder if the saying “a needle in a haystack” is also common in other languages? In Germany we have “Die Nadel im Heuhaufen” with the exact same meaning (and some adventure games have a puzzle with a needle in a haystack, btw). Is it very common around the world?

the saying “a needle in a haystack ” is also common in other languages?

In italian yes, it’s the same meaning (un ago in un pagliaio)

I wonder how the expression “I can’t wait” is literally translated in other langauges.
In italian, we usually say two expressions:

The meaning is the same: I want a certain event to happen immediately.

So, how do you translate “I can’t wait” in your mother language?

The literally translation in German would be: “Ich kann nicht warten.” But that means that you have to go and can’t stay (here) any longer.

If you are waiting (excited) for something then you could translate “I can’t wait” with “Ich kann es kaum erwarten” (“I can hardly await it”).

So the German expression is close to the English one.

Dutch is exactly the same.

Because she would speak half german, or?

…because that is the correct spelling in English?

and yeah, she speaks half-German too!

perhaps we should split this discussion to the Official language thread, before @Calypso punishes us…

and yeah, she speaks half-German too!

Gee, I wonder how I know that? 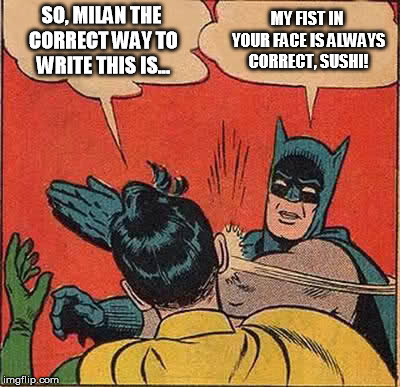